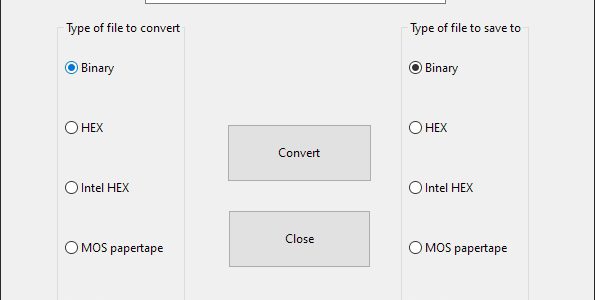 On the Utilities page I have two programs to convert to MOS Technology papertape format: KIMpaper, a command line utility, and ConvertHexFormat, a GUI app.

All in Freepascal/Lazarus source format, and tested on Linux (Raspberry PI OS) and Windows 10 64 bit. So the programs will run everywhere Lazarus is available (MS DOS, WIndows, Linux Mac OS).

ConvertHexFormat is a more recent GUI utilitilty with many more 8 bit hex formats as input and output.

There were some bugs of course in older versions. V2 added the ability for multipart hex formats, records having a non-consecutive load address. That seems to wok fine since V2.1
In 2.2 a bug in MOS Papertape format for bigger files is fixed, the end-of-file record (record type 00, total line count) had a bug in the checksum calculation. KIMPAPER is and was correct in the calculation.
But in ConvertHexFormat it was wrong (as it still  is in the well known srec utility in the Unix world!).

KIM-1 Simulator simple demo
To test my new HDMI 4K USB Video Capture I made two videos. Simulator running on one notebook, the other notebook with t...
Updates to KIM-1, AIM 65 and SYM-1 pages
With the help of users on the German Classic Computing forum I have added many manuals and magazines in German about tho...
Cassette reading problems KIM-1
Another article from the Dutch KIM Kenner magazine: RECORDING PROGRAMS WITH THE KIM-1 AND THE CASSETTE RECORDEROrigin...
Apple 1 Manuals in high quality!
Apple 1 Manuals in high quality! By Armin of Retroplace For sale here! Of course, you know about the Apple-1 c...