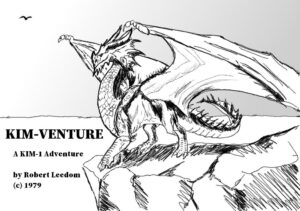 The original document with (assembled by hand!) source from Bob Leedom has been OCR’ed and converted into loadable tape and papertape files by Dominic Bumbaca and also by Mark Bush.
Dominic also made a recording on Youtube of him playing the game.

Here I present what I have now on this game:
(with thanks to Bob Leedom, Dave Wiliams, Dominic Bumbaca, Mark Bush and Nils)

KIM-Venture is an adventure game based on Colossal Cave written for the KIM-1. The program and its documentation are Copyright © Robert Leedom and we make no claims to any of this material. I (Mark Bush) have gathered everything together here for posterity.

Included here are both paper tape and HEX format files. The HEX files can be used on a KIM-1 clone from [Corsham Tech](https://www.corshamtech.com), especially if you have their SD card system.

Note that the scoring program overwrites some page zero locations. If you want to be able to go back to your game after seeing your score, then you will need to save page zero first, then run the scoring program, then load your saved file and also `Venture-Game` again and restart at `$0100`.

The original tape IDs of these files are:

If you are using the KIM-1 clone, then you will not be able to load the `Venture-Game` or `Venture-Scoring` as HEX files from the SD card system completely because the extended monitor uses the stack. Load them from the paper tape files instead.

Return to the game by loading your saved file instead of the original zero page data when you load the program and setting the contents of `$03BD` to the value you noted.

For the full version mentioned below (in an expanded KIM-1), record and restore the contents of `$04BD` instead of `$03BD`.

* The Instructions] for playing the game.
* The Game Manual containing information about how to load and run the game

The `source` directory contains the original source code for the game with all original comments and formatting preserved. There is one change from the original, though. In `Game.asm` in the Main Move Loop, the original code used absolute addressing for the `INC NMBUTS` statement. [My assembler](https://github.com/markbush/6502-assembler) uses zero page addressing when possible which would make this a 2-byte instruction instead of 3-byte, so I have added a `NOP` to preserve addresses in the output.

These source files (except `ZeroPage.asm`) are location agnostic.
This allows them to be recompiled into alternate addresses.

The above code can be compiled using the following files:

These files are necessary as the individual source files refer to locations and subroutines located in the other parts. They can only be assembled together. Each of the above files contains a directive causing only the relevant part to be output, enabling the separate program files to be created.

The `Venture-Full` file does not include the zero page data so that must be loaded separately and will update the location of the message table in POINTR when run. This is partly to avoid trying to load data through stack locations (which could mess up the loading process) and also to make it easier to keep copies of the zero page data in order to save the state of a game.