An operating system for the 6502. Published here with permission by the author Richard Leary, 2021.
In the following text “I” is Richard Leary.

What you will find here:

License
“DOS/65 software and documentation are provided as shareware for non-profit, educational, or private use. Any other use is prohibited without approval of Richard A. Leary.”

The DOS/65 V3 ROM software and all other DOS/65 software are free software; you can redistribute it and/or modify it under the terms of the GNU General Public License as published by the Free Software Foundation; either version 3 of the license, or any later version.

Of all the problems which plague the 6502 enthusiast, the lack of a low-cost, compatible operating system is one of the most critical. The operating system, the media, and the floppy disk hardware of the common 6502 systems (Commodore, Apple, OSI, Atari, and AIM/SYM/KIM) are not compatible and can not readily be interfaced to systems other than the original. This incompatibility has been the major factor which has prevented the 6502 machines from achieving the status that other systems have achieved.

The challenge then is to establish a standard which minimizes cost, allows easy use by different systems, and ultimately will help make the 6502 and its derivatives the universal processor it is capable of being.
What Richard has done is attack the software side of the problem in order to make any 6502 system a truly workable disk based system. In addition a degree of compatibility is now possible not only between 6502 systems but with large parts of the world of CP/M systems. The result of my efforts is a system of software which Richard has named DOS/65.

DOS/65 itself is a software system which has the same basic structure as the foremost 8080/Z80 software standard, CP/M, and is file compatible with CP/M Version 1.4 and later versions. Since the machine language software obviously can not be compatible between the 8080/Z80 and the 6502, the term “file compatible” simply means that a DOS/65 diskette could be inserted into a CP/M system or vice-versa and the files manipulated in every way except actual execution.

The system could not tell the difference between files created on the host versus those created on a CP/M system. For example a BASIC-E source program which had been created, edited, and used on a CP/M system could be used on a DOS/65 system using the BASIC-E/65 compiler and interpreter with at most only minor changes. Data files of all forms could be exchanged between systems without restriction

The reasons for selecting CP/M as the standard are simple. CP/M has many features including:

None of these claims are overwhelming in themselves, but taken as a whole they stand as a compelling reason to use CP/M as the format and structure standard for a 6502 operating system.

CP/M is a trademark of Caldera.

DOS/65 V3 can run from a read-only memory (ROM). To prove the concept I’ve implemented the ROM version on two different platforms. The first is the WDC W65C02SXB and the second is Daryl Rictor’s SBC2. In both cases I built an auxiliary board using Andre Fachat’s VIA-based SPI interface design. Both platforms are up and running with a micro-SD card as the storage media. Each system has four 8 MB drives provided by the micro-SD card. The interfaces are implemented as four layer printed circuit boards from Express PCB. Because the connector configuration on the two platforms are slightly different each is a unique interface.
Changes associated with DOS/65 V3.0 are small in number, they significantly improve the utility of DOS/65 especially for those users having some sort of high capacity mass storage device attached to their system.
The key changes are:

All software has used 6502 op-codes and addressing modes. No 65C02-only code has been used.

I released (sold in those days) a version for 5.25 inch drives for OSI and an eight inch OSI version. Development of these was frozen in 1986 as there was not enough demand to continue OSI support. I did normally ship DOS/65 as a two disk start up where the first disk was used under OS65D. I did the ROM because for all practical purposes I never used OS65D. If I remember correctly the 5.25 inch version need 9 or 10 diskettes and the 5 inch version a lot less because of the increased diskette capacity.

The SIM (system interface module) code – that is what talks to the hardware – was straightforward and could easily be expanded to handle larger capacity drives. I strongly recommend that for 5.25 inch systems.

DOS/65 manages disk use by dealing with 128 byte logical records. However because of the characteristics of the OSI floppy disk controller the physical sectors are full tracks and a full track is what is read from or written to the diskette. The SIM code maps logical records from or into the full track buffer. A physical track for the standard 5.25 in drive is 2048 bytes. Every track on a DOS/65 5.25 inch diskette is 2048 bytes long. 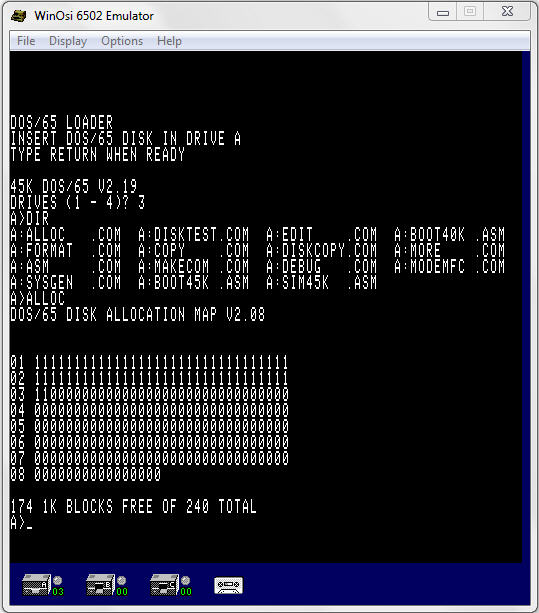 C64 port of DOS/65
“What I (Richard A. Leary) have done is attack the software side of the problem in order to make any 6502 system a truly workable disk based system. In addition a degree of compatibility is now possible not only between 6502 systems but with large parts of the world of CP/M systems. The result of my efforts is a system of software which I have named DOS/65.”
Richard’s implementation is initially made for S-100 based systems, but he began to port it to the C64 also (see below).
DOS/65 has a lot of CP/M look-alike commands for the command line and also some applications like BASIC-E included.
Of course some differences between CP/M-80 and DOS/65 exist – the lowest memory areas (e.g. the “zero page”) are not usable for the TPA, so the usable system memory area starts at a higher address (e.g. $0400). 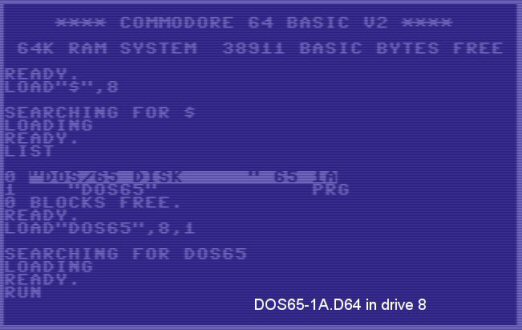 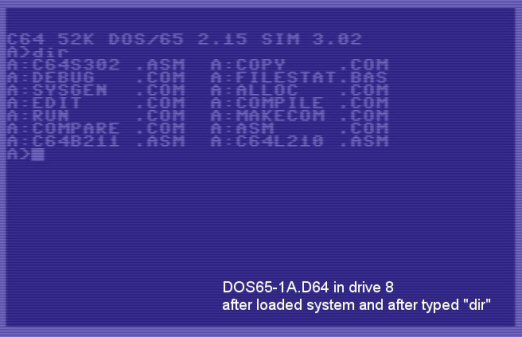 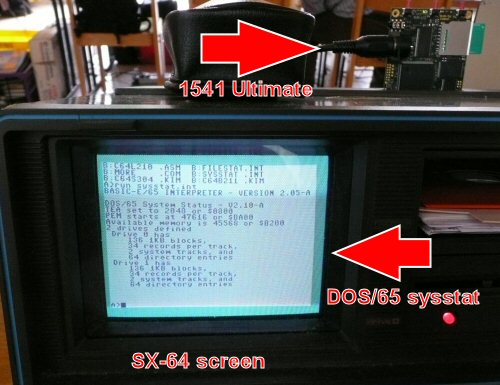 See the topics on the retrobrew forum 6502.org and his github repository.

What makes CP/M and DOS/65 special is the separation between hardware and the operating system with a well defined interface. In CP/M terms this is the BIOS, the only part to implement for new hardware. In DOS/65 system this is the interface module (SIM). Various examples are in the sources archives.
This part of the “V3 ROM Supplement”, see the V3 section illustrates how this works in DOS/65.

The first steps in implementing the ROM version of DOS/65 on a new platform are:

Implementation is straightforward. The basic DOS/65 software structure need not change. However, the specific addresses of functions may have to change as a function of the platform monitor or other software elements. The process of implementing D0S/65 for the SBC2 drew heavily upon the experience involved in producing the version for the WDC SXB but was actually simpler because of the capabilities provided by the SBC2 monitor.

The SD interface for the W65c02SXB based on Andre Fachat’s v1.1 design using a VIA and three eternal ICs.

DOS/65 V2 as implemented on the nhyodyne modular backplane system.

More information in the 6502proc folder at this github page. 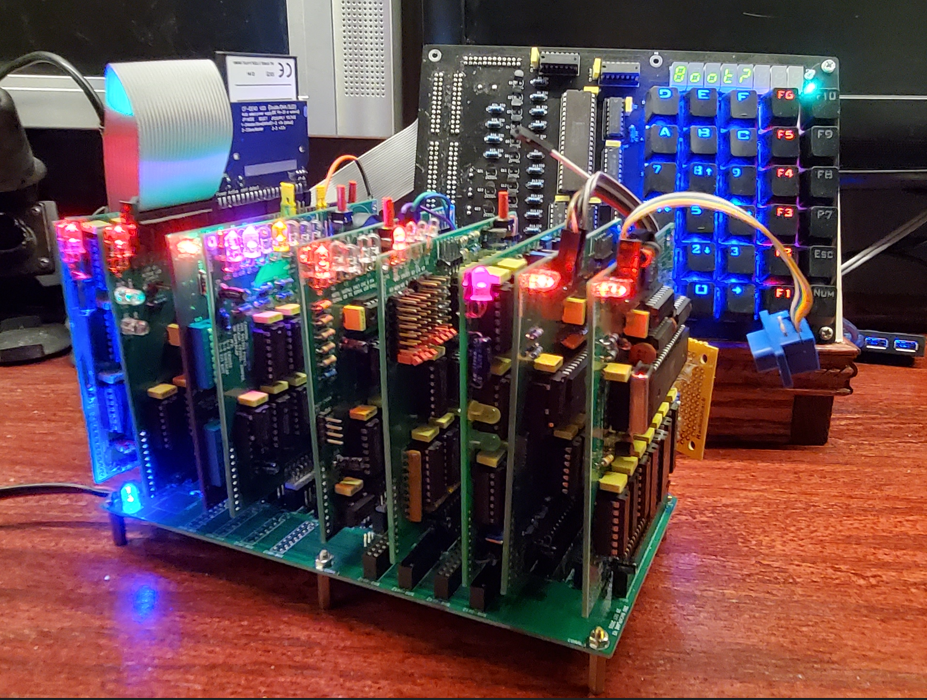