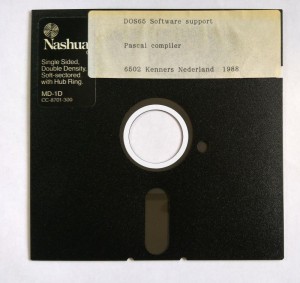 Pieter de Visser has written an ISO standard Pascal compiler (according to Pascal User and Manual, Jensen & Wirth) for DOS65. Including floating point!
Quite an achievement, since the limited memory in a DOS65 system and the unfriendly nature of the 6502 towards stackframe based languages.

The compiler is written in assembler, in two flavours: 6502 and 65C02. For the 65C02 version the assembler sources are available.

Here an archive with sources and the compiler files. And some test files here.