The Data Handler is a SBC (actually two boards!) built in 1975 by Western Data Systems Corporation.
One of the first computers based upon the then new 6502, as the KIM-1. Jolt, OSI 300.

Photos and blog about this SBC by Armin Zink, who owns a Data handler. 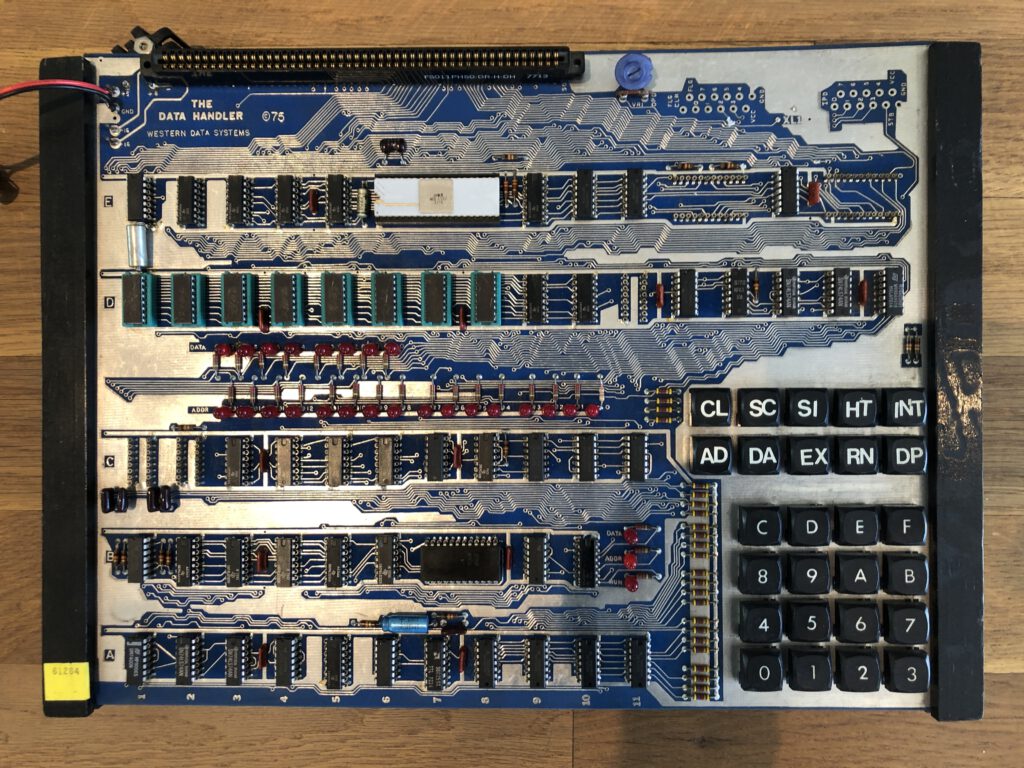 The following text and scans of the manual are by Armin Zink on his blog.

Data Entry into Ram is done via the Front Panel. This may be much easier than operating an MitS or Altair, but not as comfortable as other SBC with a ROM-Monitor.

There are two I/O Ports on the upper right of the board. One Port for 8-Bit Input and one Port for 8-Bit Data output.
The board has a Altair compatible BUS Connector, allowing to use one of the many Expansion Cards available for Altair Systems.
Three unpopulated spare sockets are provided for system modification.
To increase system stability, the RC oscillator can be replaced by a Crystal. The Power Supply is realized by a single 5V Supply.
An optional Regulator can be soldered on the back of the board, converting 8V power provided through the Altair Bus or an Altair Power supply.

The Manual covers the building and the operation of the Data Handler and also contains the complete Opcode description of the 6502 and the schematics of the board. In the 70s buying a manual for a chip was expensive, so having the 6502 opcodes at hand was convinent. There was also a section with a instruction lookup table.
A “program section“ contains very few simple programs to start programming.

The bare board was offered for $79, the kit with all parts for $179, so it was half the price of a KIM-1.
The „Data Handler“ was a nice tool to be populated by hobbyists and to learn the Basics of 6502 machine language, but its operation requires some phantasy: Compared to the KIM-1 SBC the Data Handler has NO onboard ROM, PIA or TIA and no Monitor Program.

The „Front Panel“ is a hard wired system to enter data into Ram and start/stop and reset the CPU.
At first the CPU is Reset, then halted, and all inputs have to be cleared.
Then the program is entered in the static RAM locations. If the computation requires input data, these values have to be written in specified memory addresses. Finally you specify the start address of the program in reset vector address $FFFC and $FFFD.
The program execution is started by resetting the CPU. Manual stepping through the instructions allows to verify that the CPU jumps to program start address and runs the program.
If the calculation is finished, the CPU has to be manually halted by pressing „HT“. If there has been results of a computation, these could be viewed by examination of the corresponding memory locations.

In the rear right the we can find the I/O-Section of the DBC. It holds a strobed 8-Bit output and 8-Bit input port. Bytes written at Address 0x7FFE appear at the output port, and input data could be read from 0x7FFF. If attached some LEDS, as instructed in the Manual output could be directly controlled.
Interesting detail: output not necessarily need to be generated by program control , Data entered via the front panel could be stored at 0x7FFE directly and the result could be instantly controlled, giving a very direct response of the system.

The Board made of #47 TTL Chips plus 8x1kx1 RAM.
The onboard Ram is located at 0xFC00 and not 0x0000 . To my knowledge (Armin) this disables the use of any Zero Page features like POP/PUSH and indirect Addressing of the CPU. In the manual it is suggested to map RAM expansions to Address 0x0000 to enable all CPU features like Stack.
Since Address decode is done via some Gates, it seems pretty simple to modify the Address Decoder to additionally Map the existing Ram to Adresse $000x and $001x to add these features. 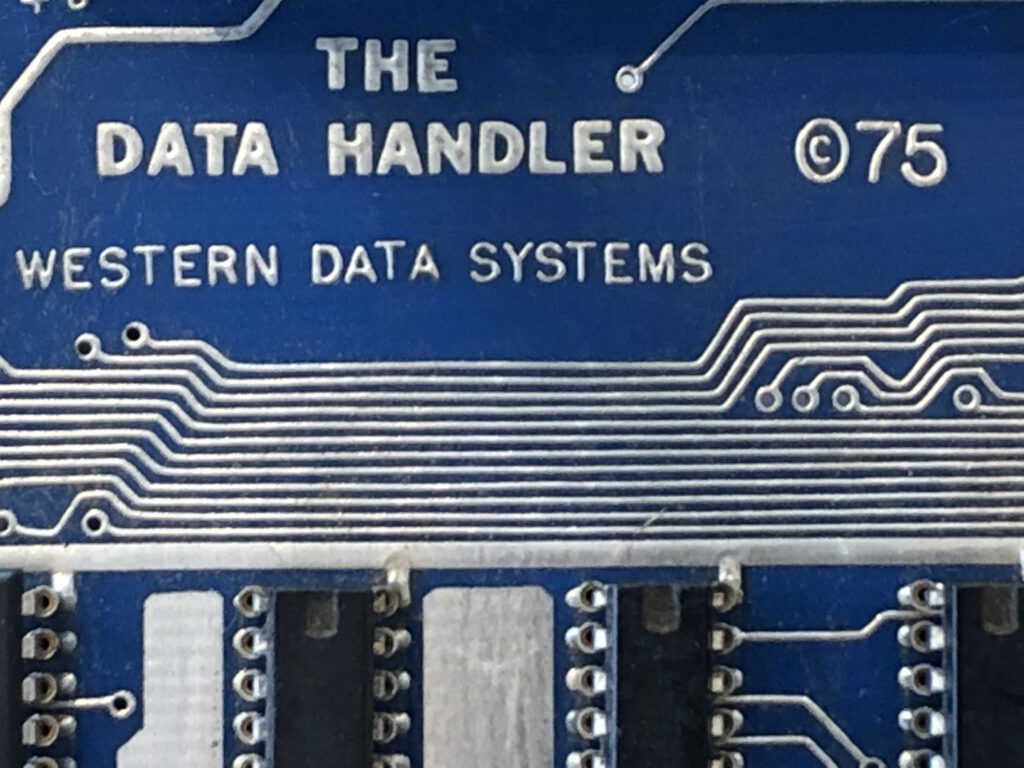 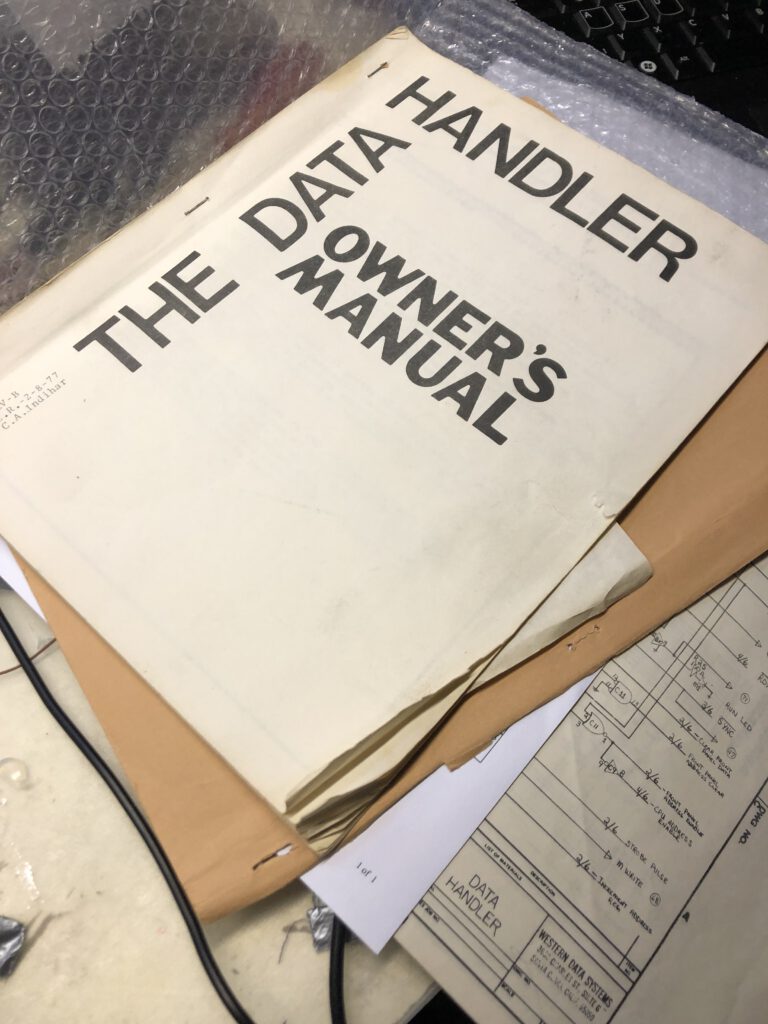 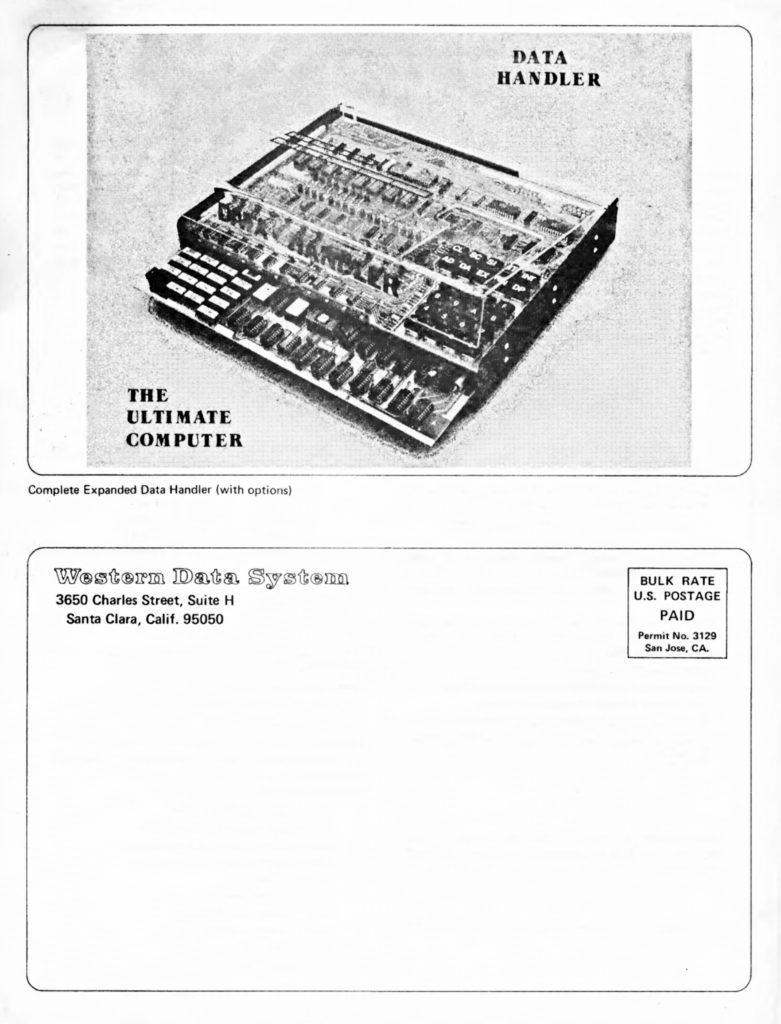 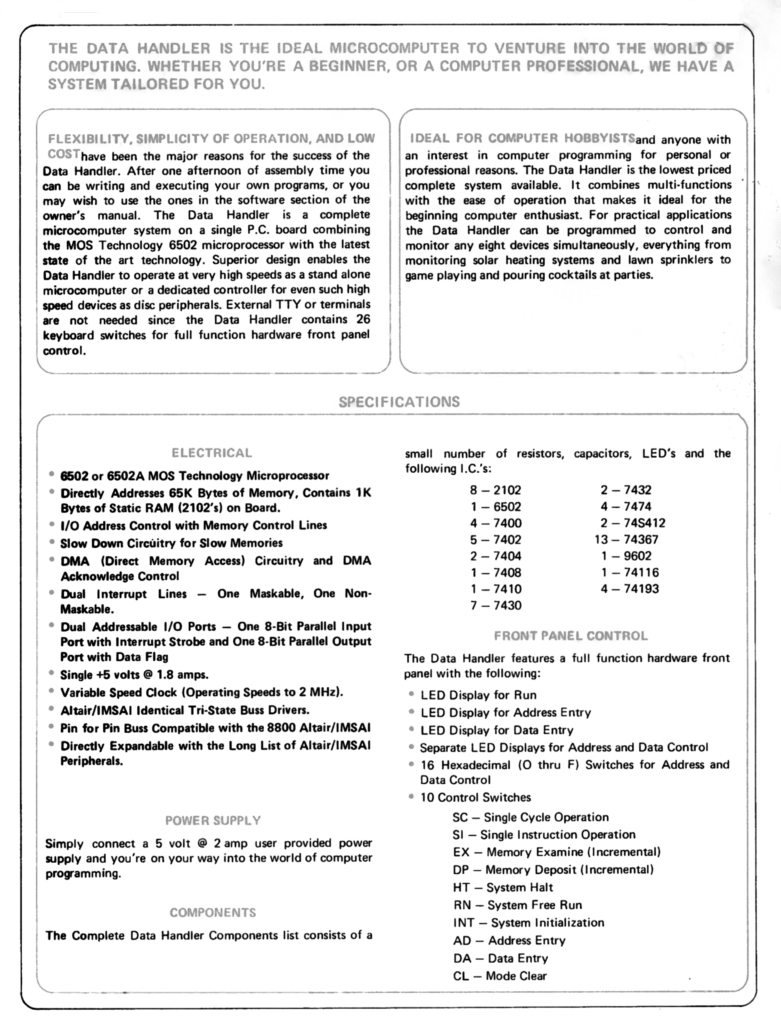 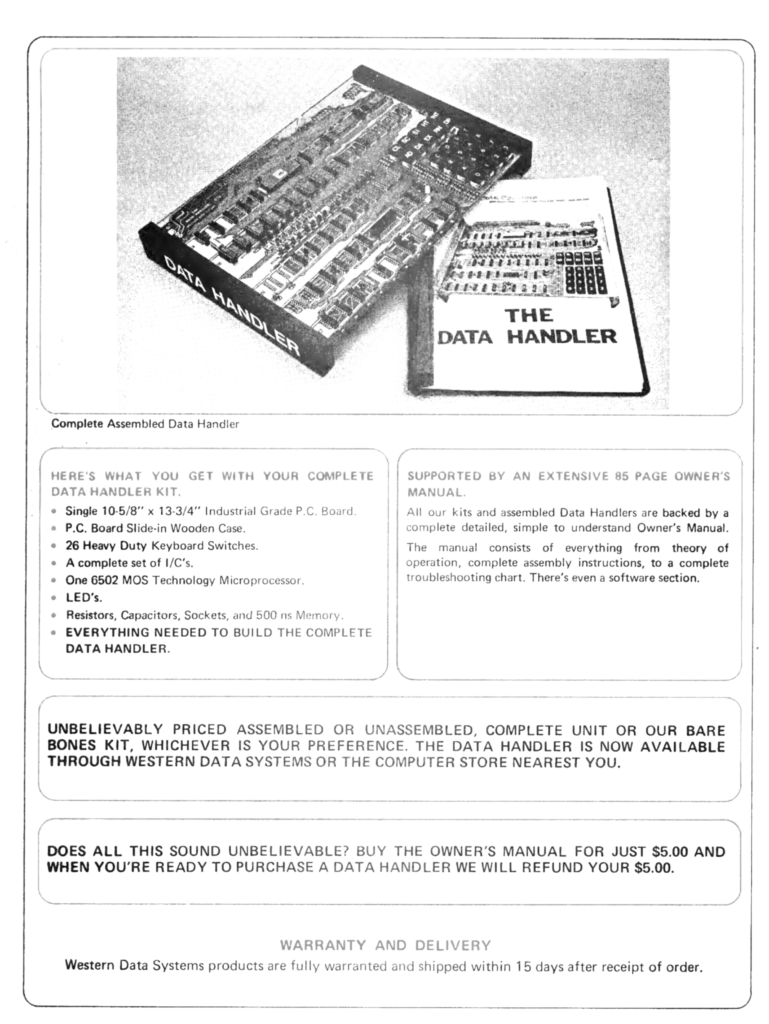 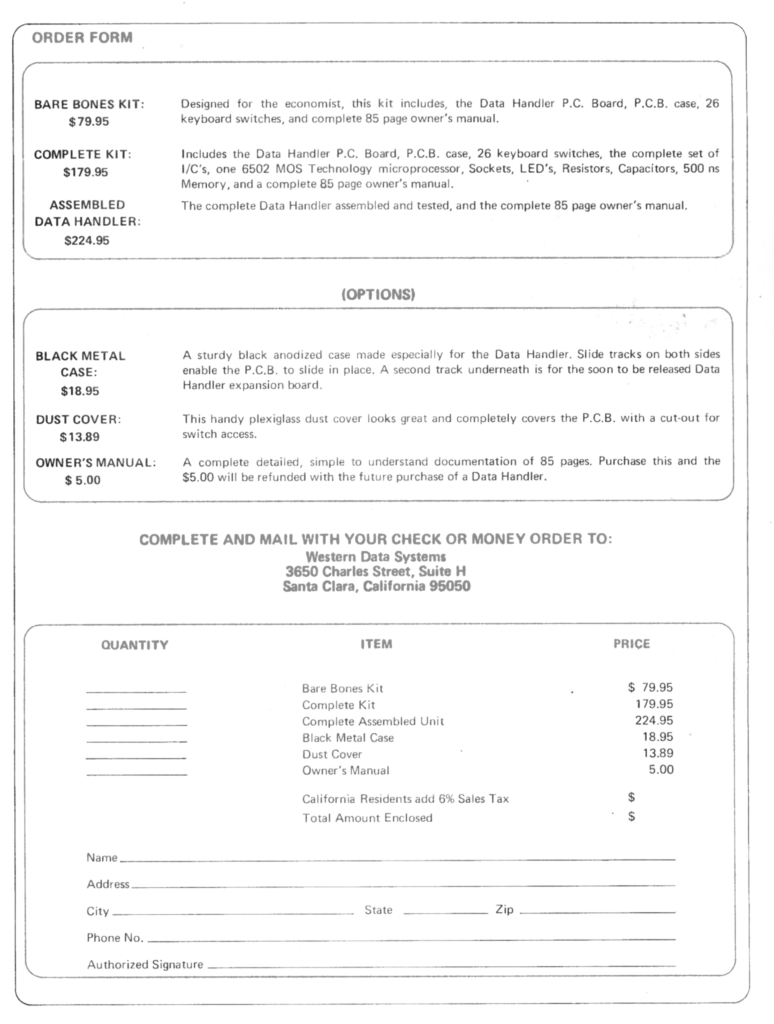 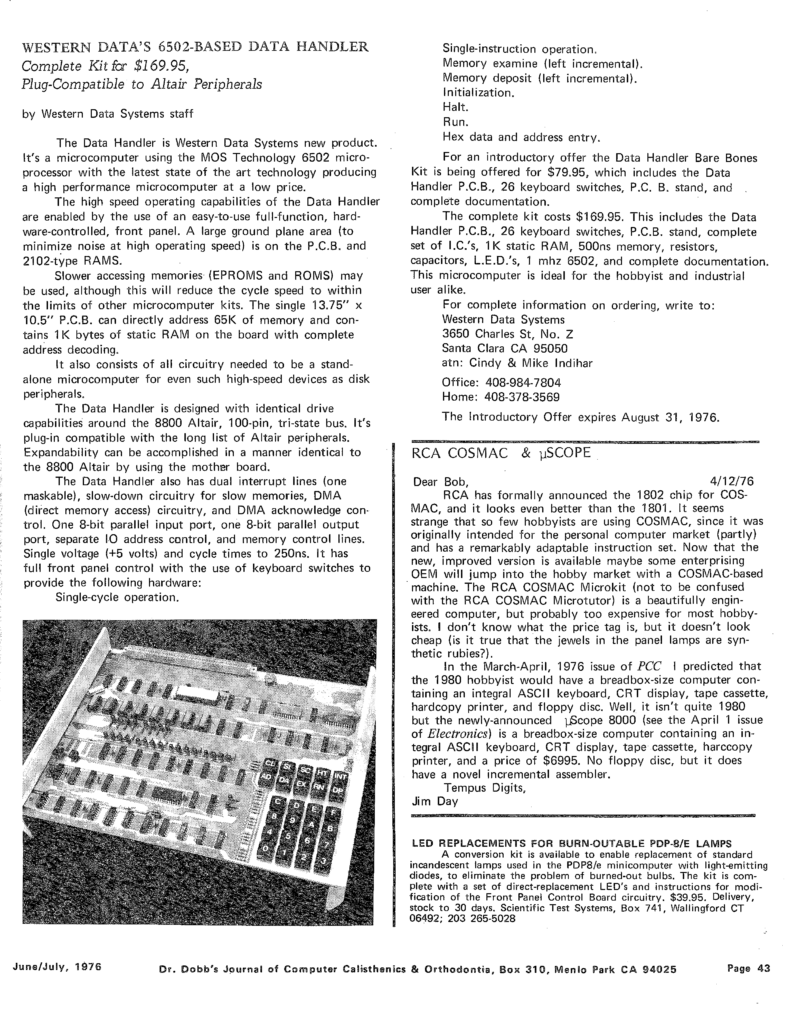 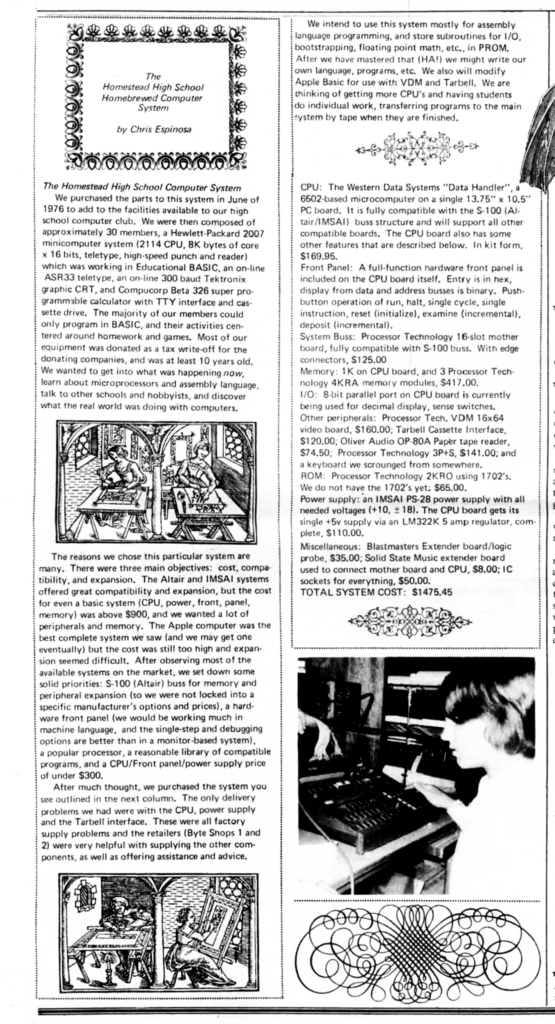