As simple as can be, a complete SBC for the 6502, the OSI 300. A 6502 trainer with 128 bytes of RAM, and binary switch programming, with two input lines and a 1-bit output latch.  Designed as a learning tool, the manual is essentially a comprehensive introduction to bare-metal 6502 programming

On this page: photos (thanks Early Computers) , the scanned manual (thanks OSIWEB) and the reconstructed circuit diagram and design notes (thanks Randomvariations)

From the OSI 300 manual: The Model 300 is a completely assembled and tested, ready to use, computer designed to bootstrap the student, hobbyist, and engineer into the micro-computer world. Since the manual assumes no previous knowledge of computers or digital electronics, it is also ideal for self-teaching.

For only $99 you would get the OSI 300 (completely assembled and tested) and a lab manual. You could rig 4 alkaline D batteries together and get up to 20 hours of use.

The Model 300, although extremely simple, did have input and output capability. The lab manual consists primarily of 20 experiments one of which is how to output the letter A to a teletype machine.

It does not have any storage capability so when you turned the power off, you lost everything you had laboriously entered. And the process of entering data iss not easy. You have to enter each two letter operating code and the register in which it was stored, line by line. 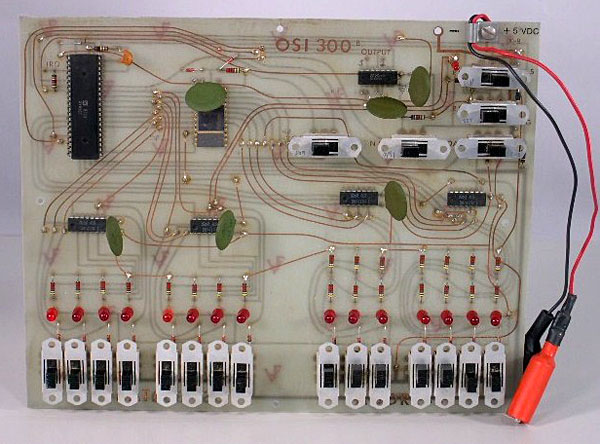 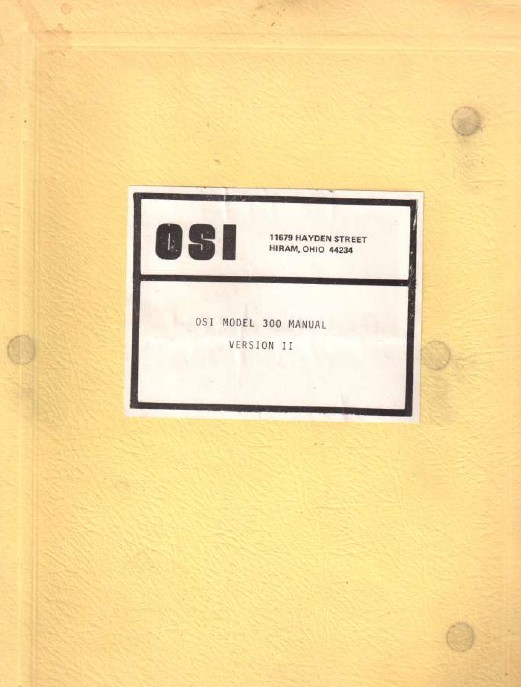 The scanned manual in pdf format. 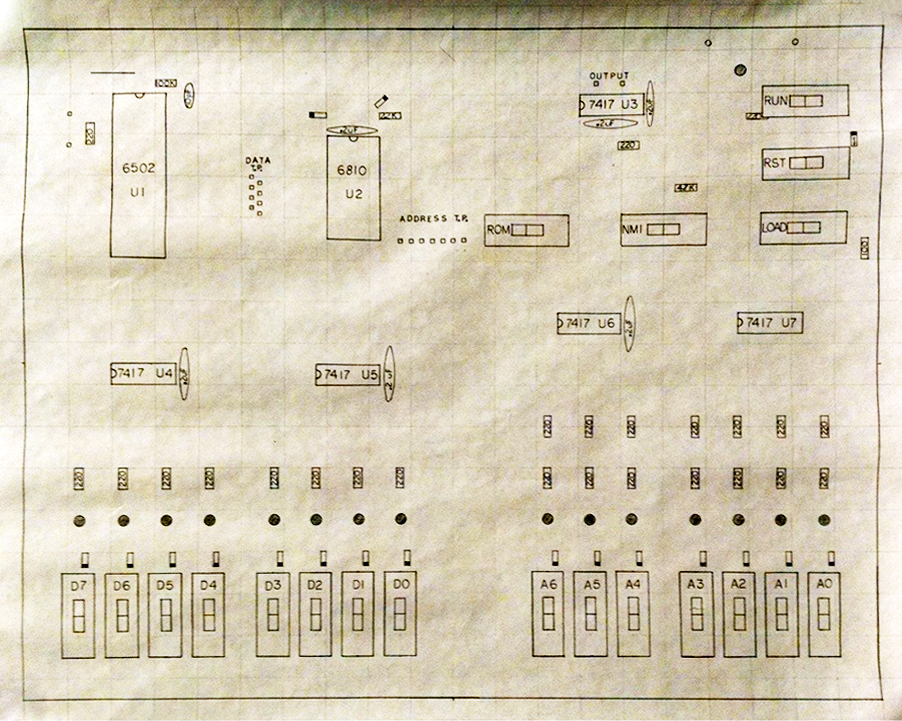 The OSI Model 300 Computer Trainer was advertised by Ohio Scientific Instruments in 1976 as a computer designed to introduce individuals to computers and teach them the basics of programming the MOS 6502 processor. The original trainer consists of a MOS 6502 processor, 6810 128 byte static RAM, one bit output latch, switches for entering data, and LEDs for reading the values of RAM. Here the original reconstructed circuit: 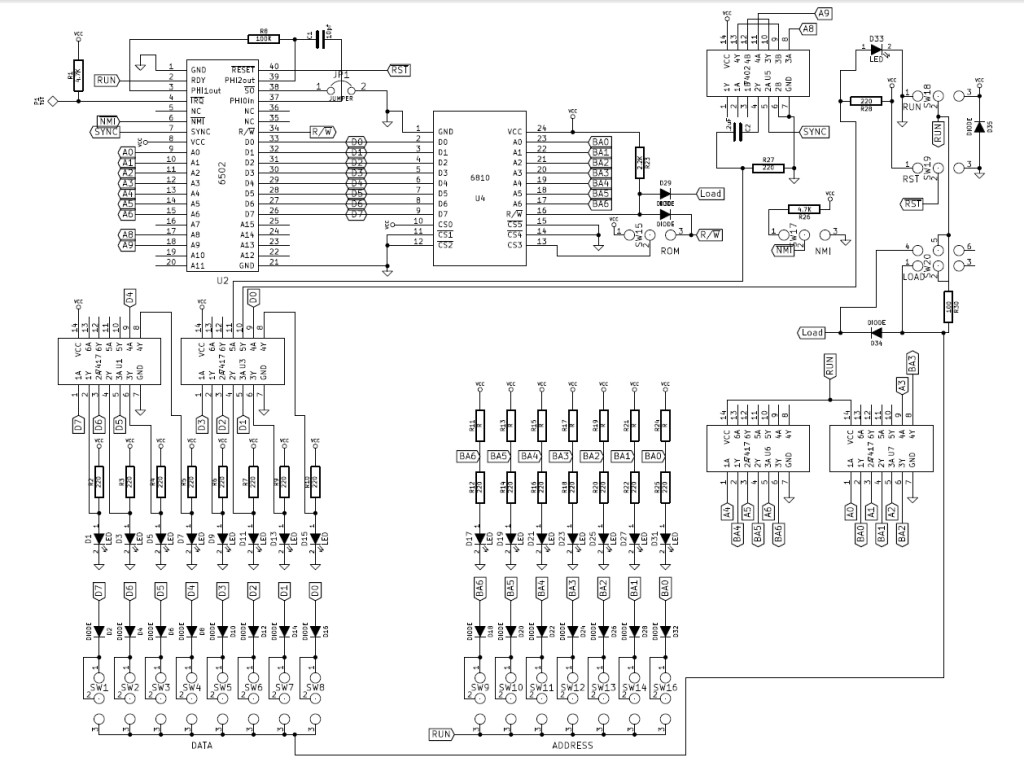 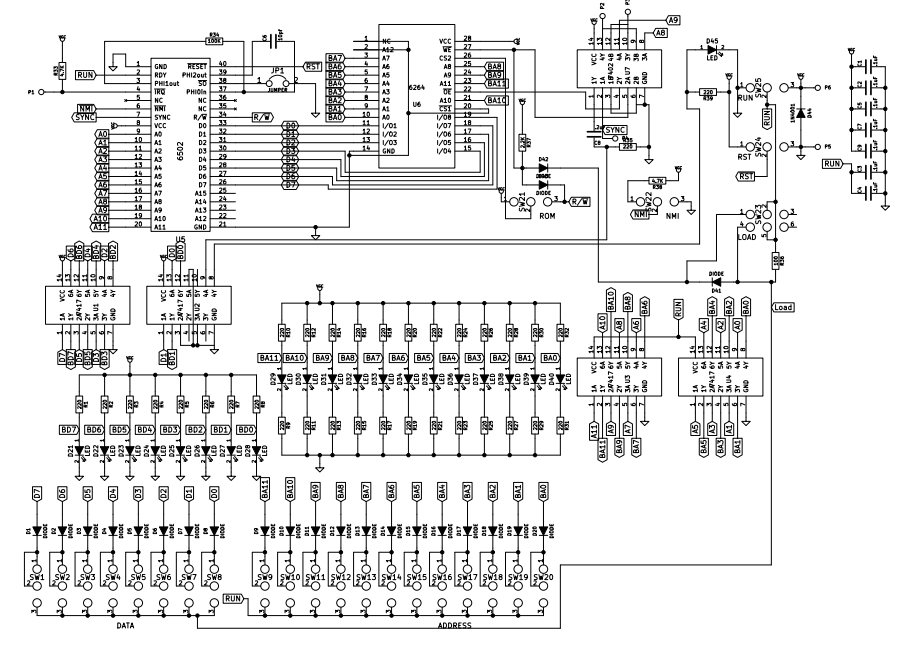 (click on the circuit to see the hires pdf)

There are several interesting design decisions made to keep the parts count and price down. The first is the usage of a resistor and capacitor to act as the clock. This takes advantage of the internal clock generator on the 6502.

The final chip, a 7402 (quad NOR,) inverts the SYNC line, driving an RC network to stretch it, before it is finally buffered to drive the run LED. Two of the gates form a basic SR latch controlled by the address lines for page 1 and page 2. I used the last NOR gate as an inverter for between the SRAM’s OE and R/W pins.

In the schematic generated, the diodes are likely 1N914 or similar with the exception of D35, which is intended for reverse polarity. It is most likely a 1N4001. Left off are the bypass capacitors for clarity. They are likely .2uF on the trainer. 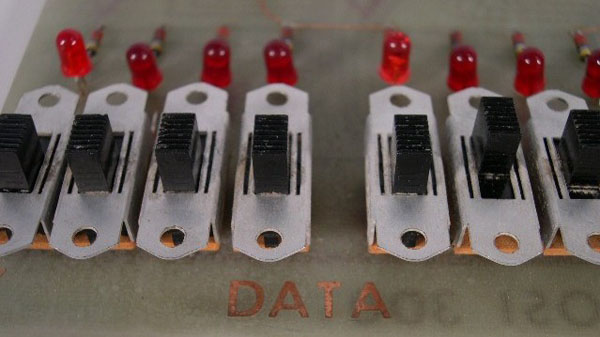 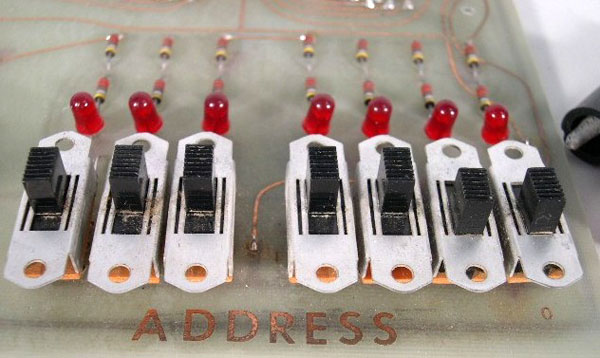 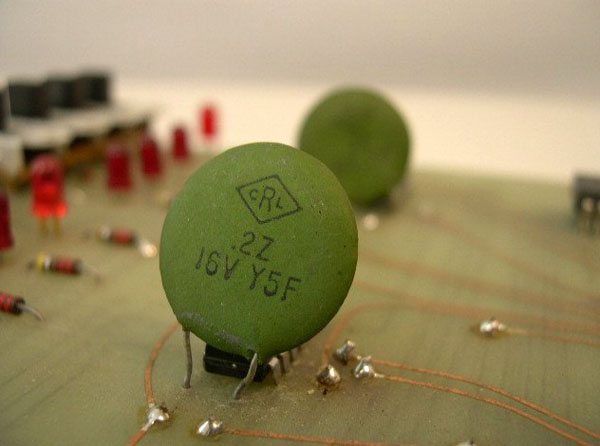 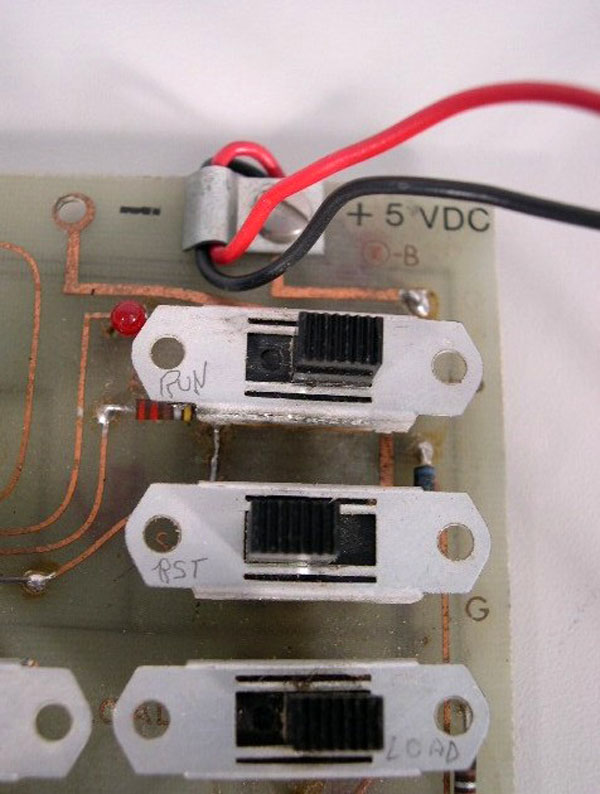 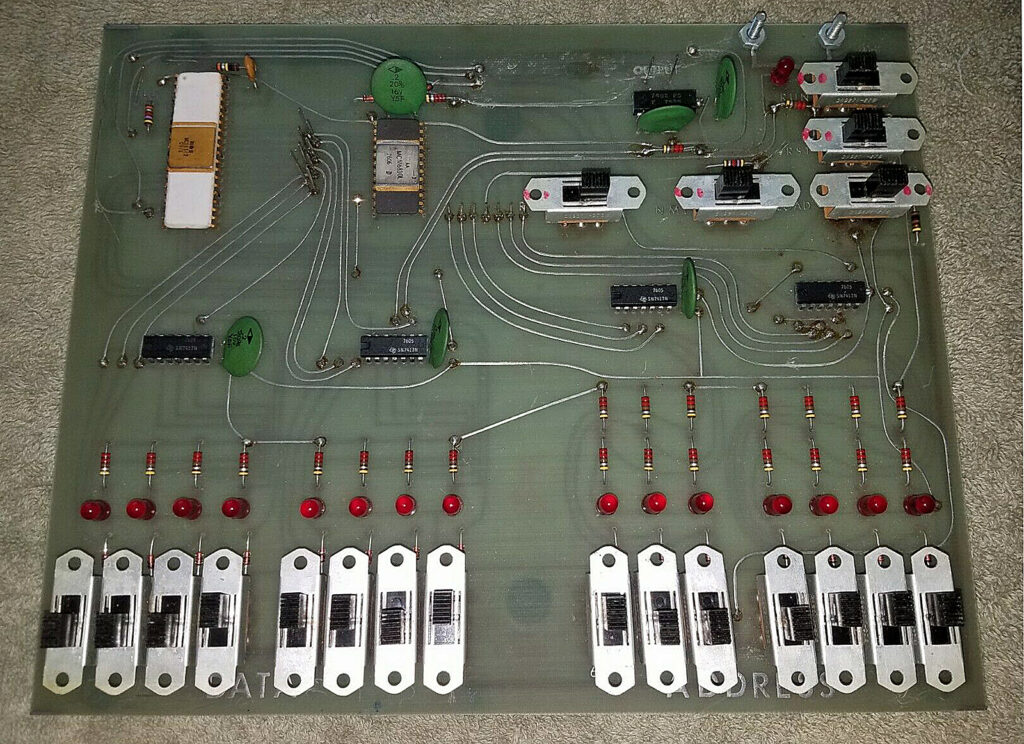 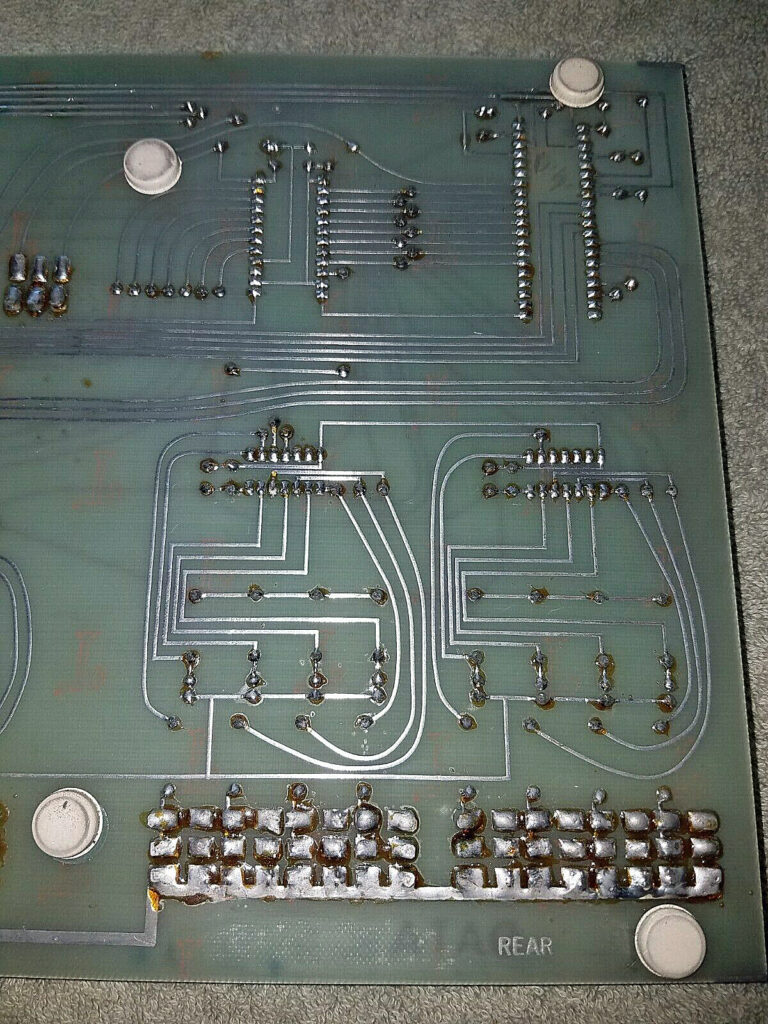 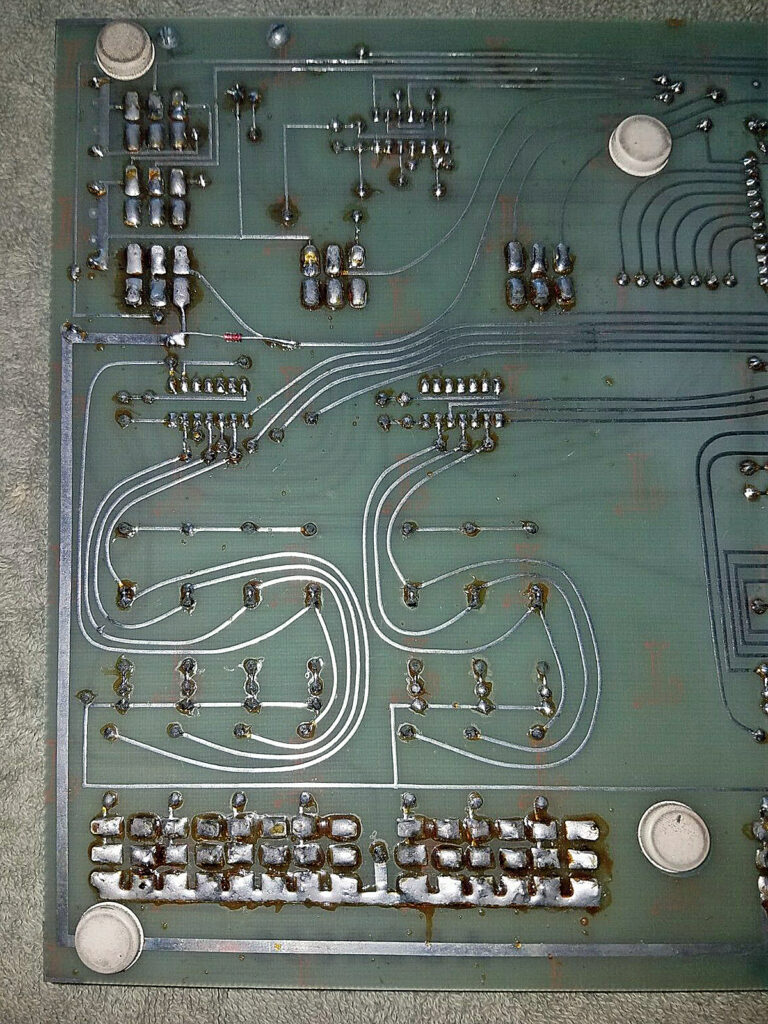 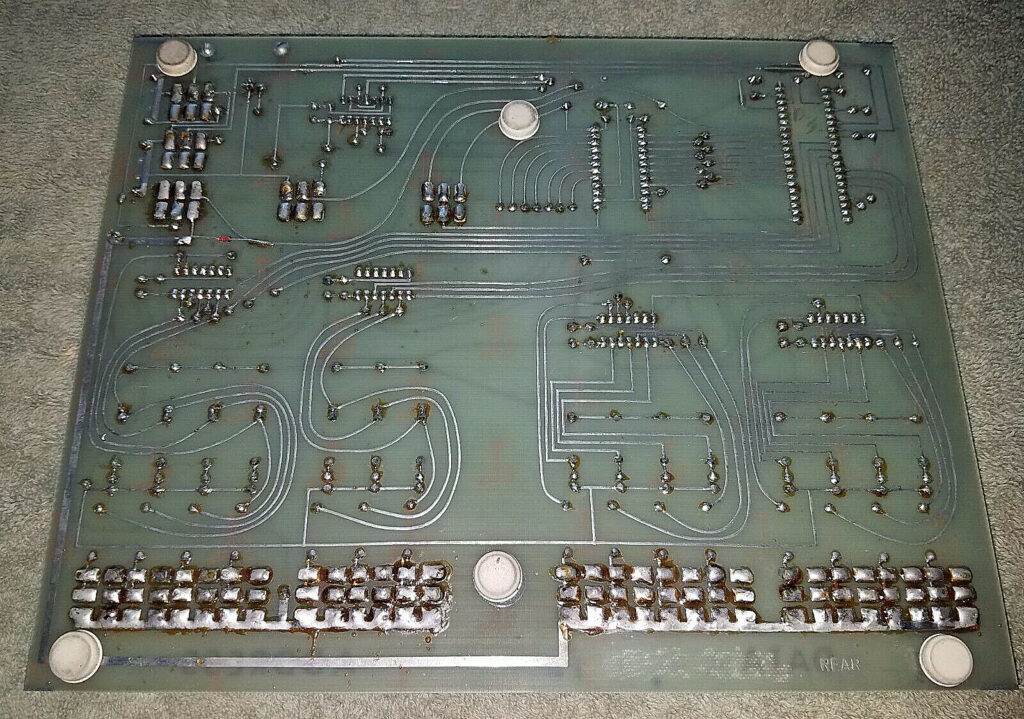 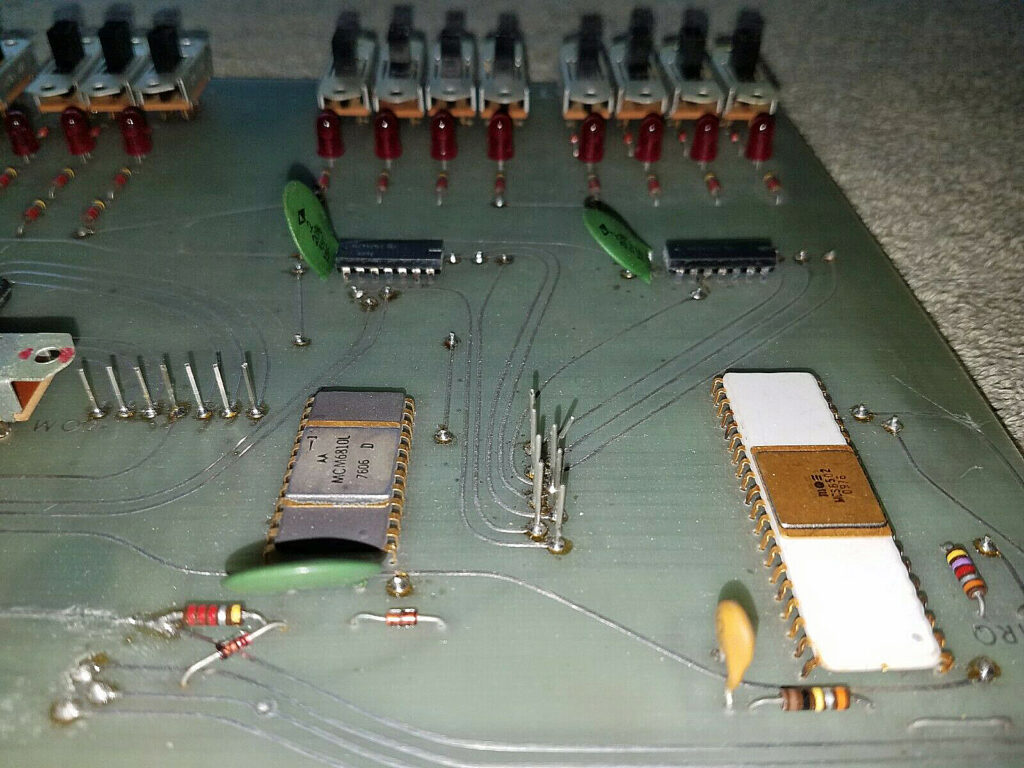 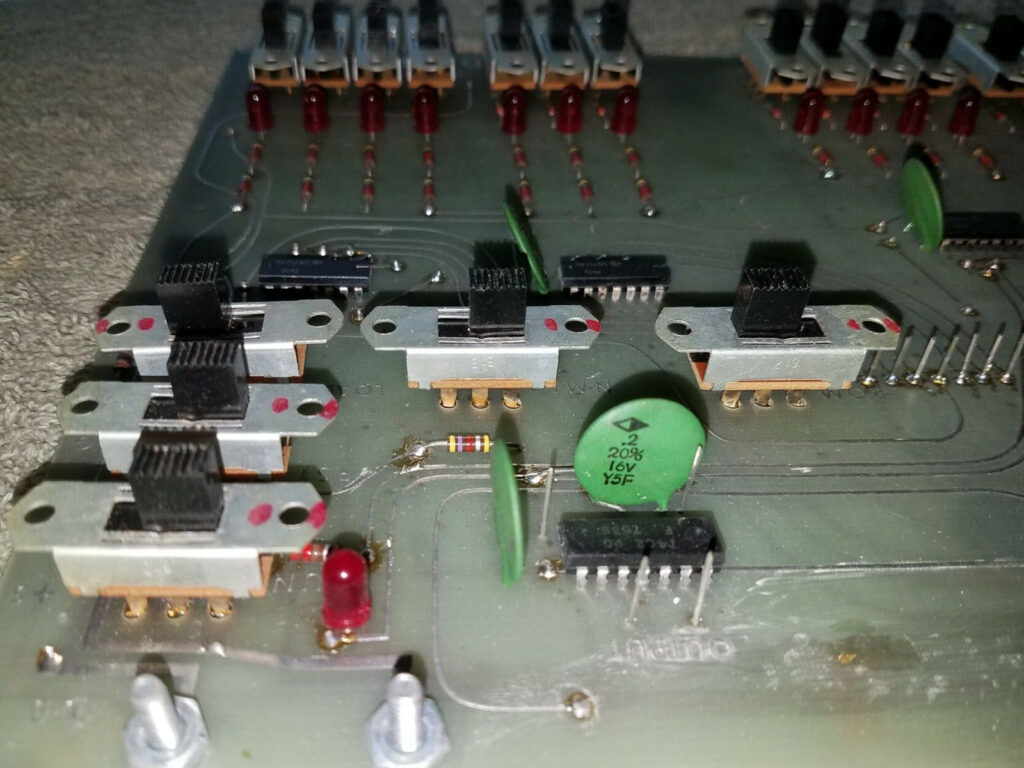 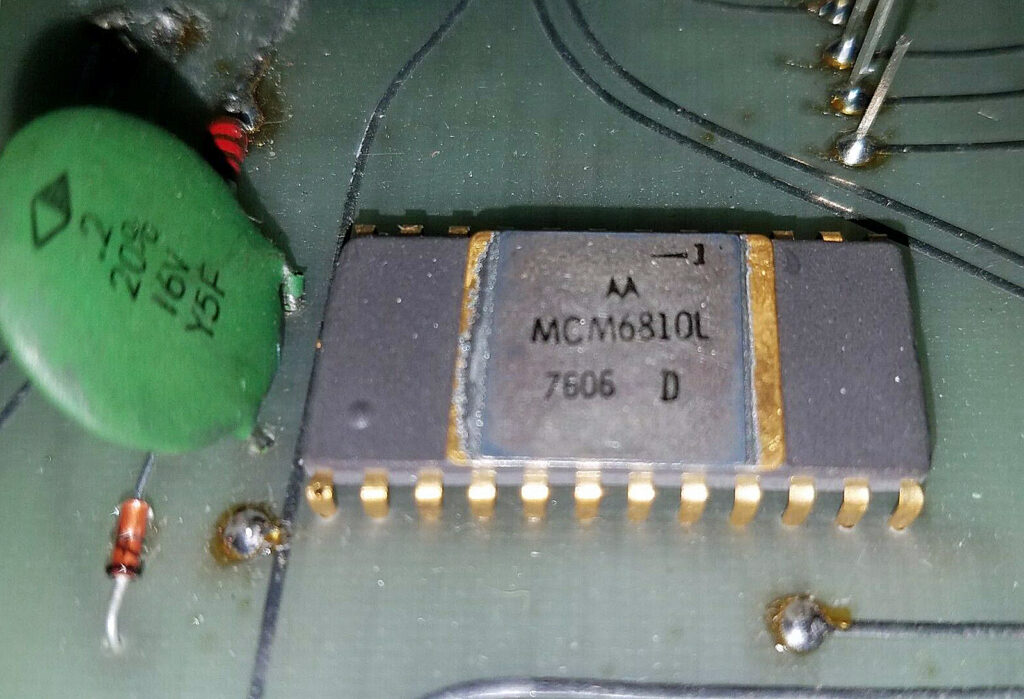 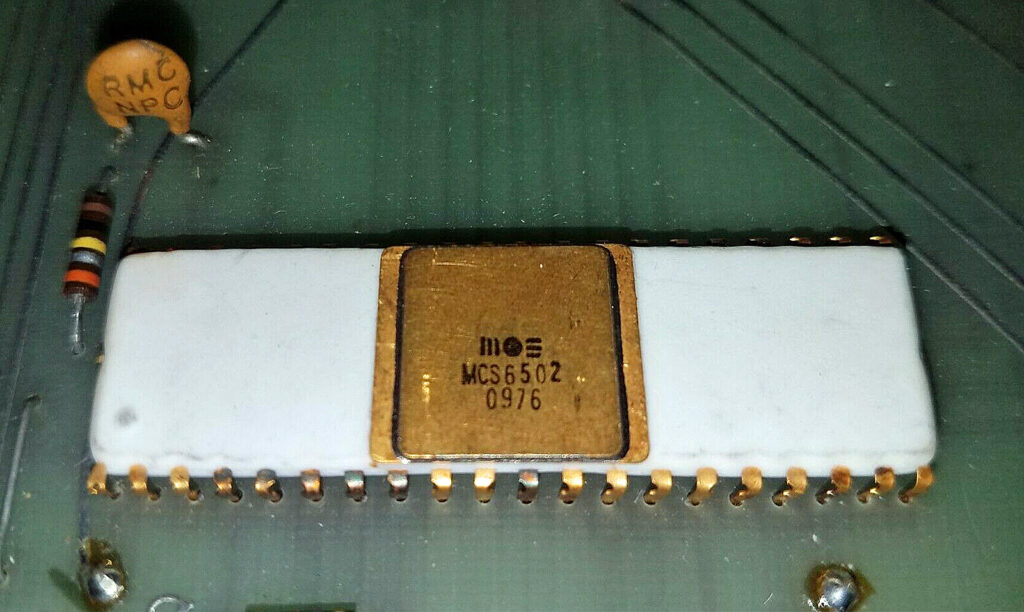 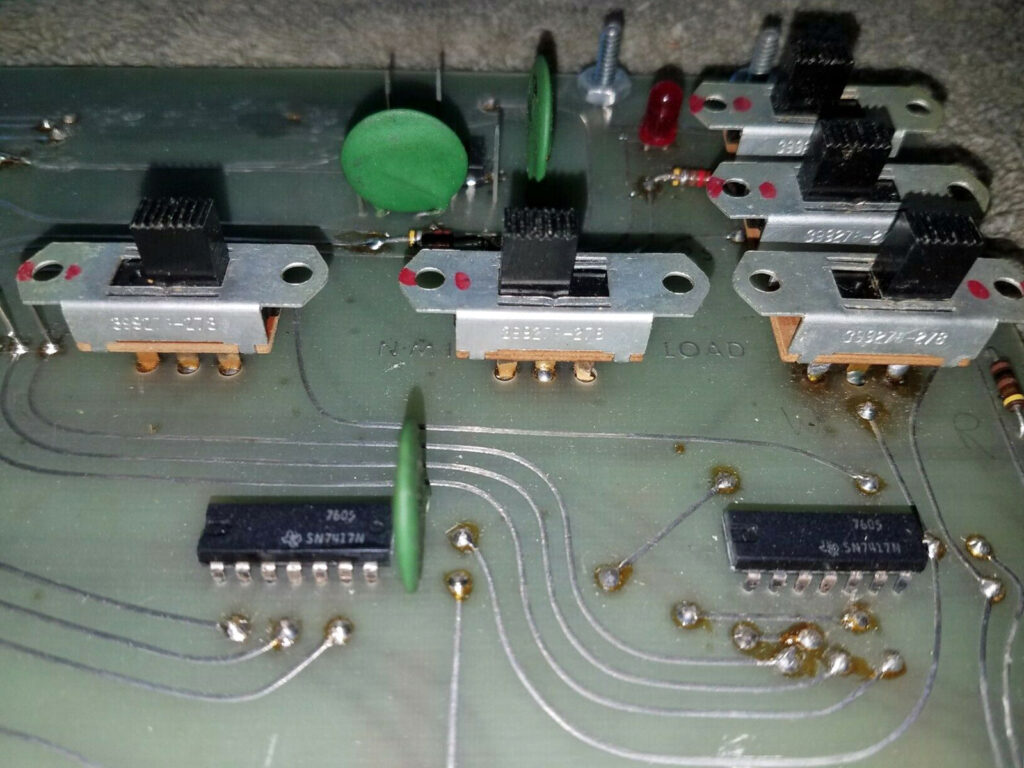 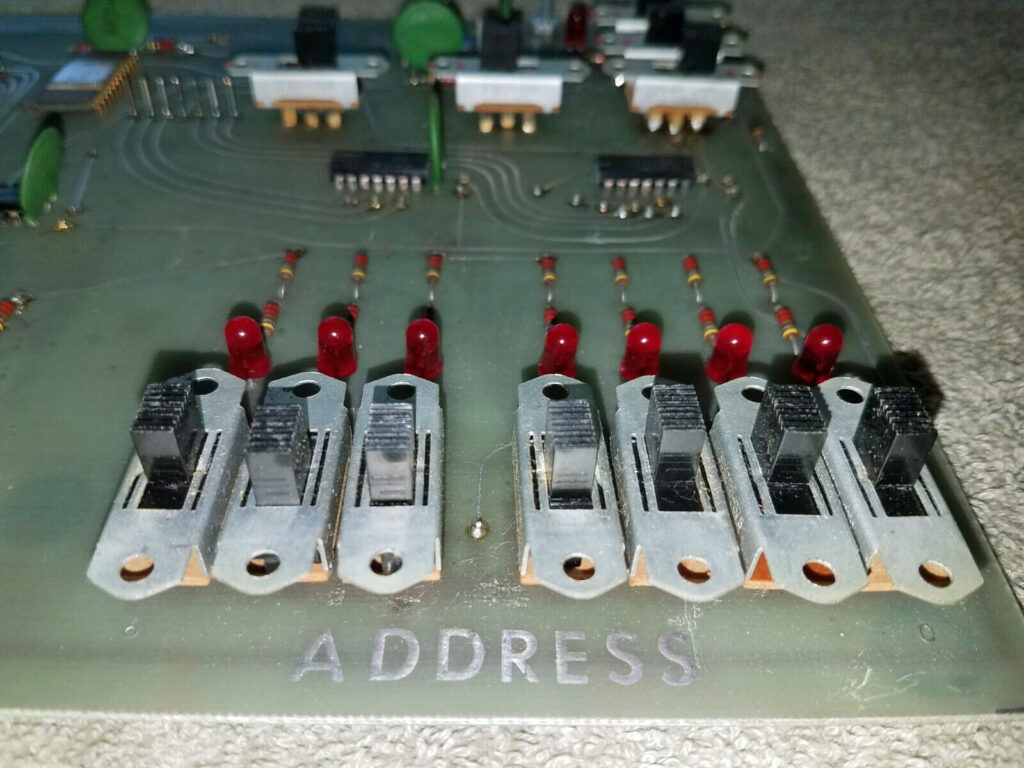 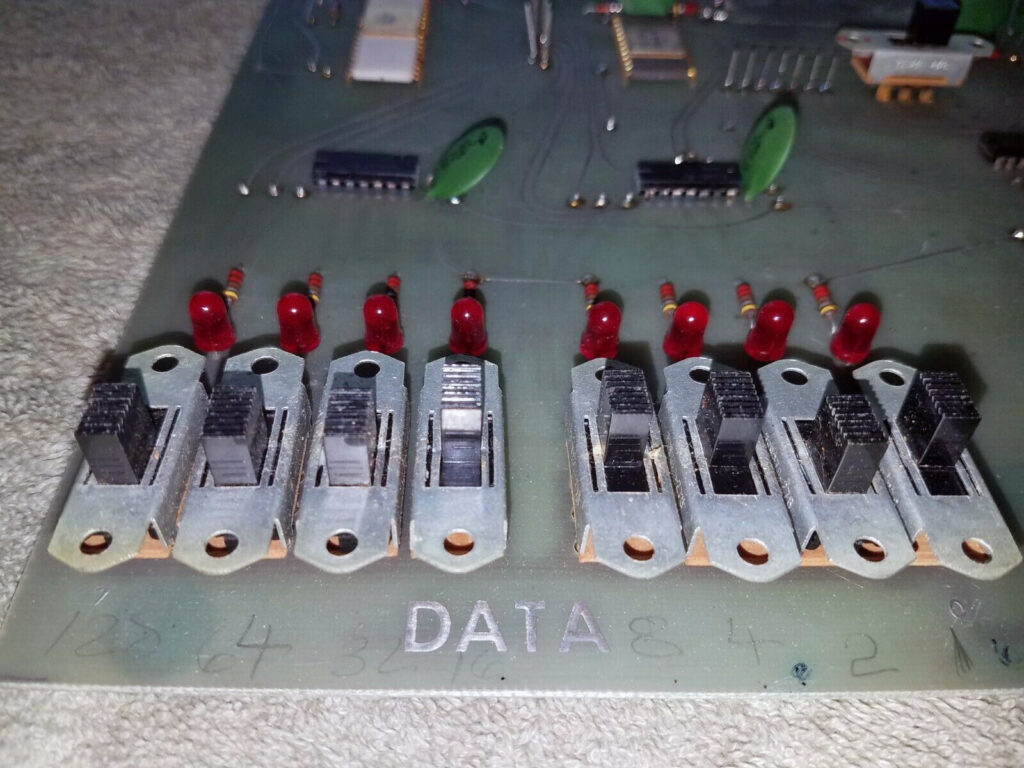 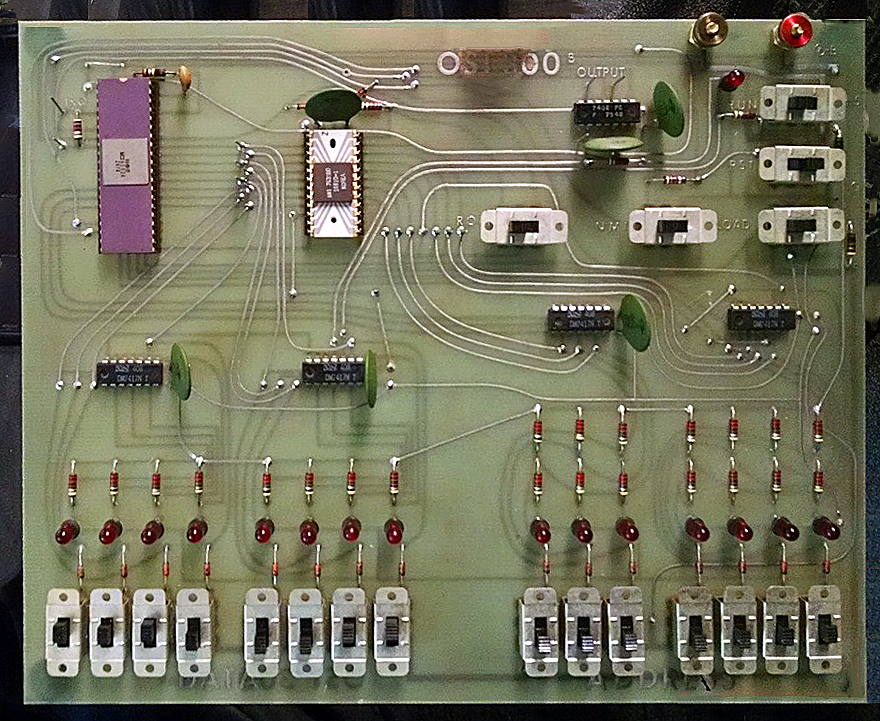 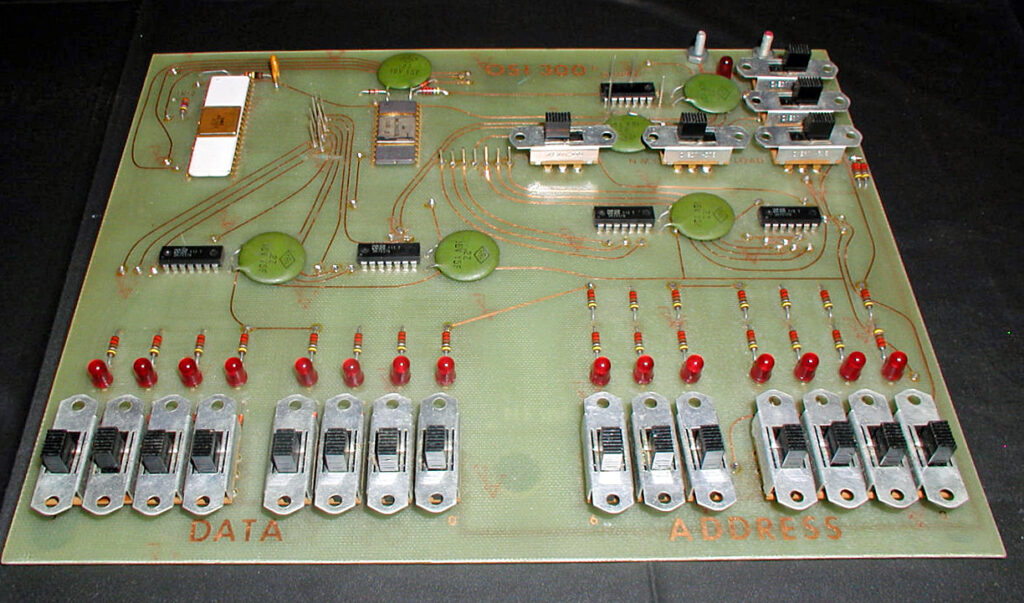 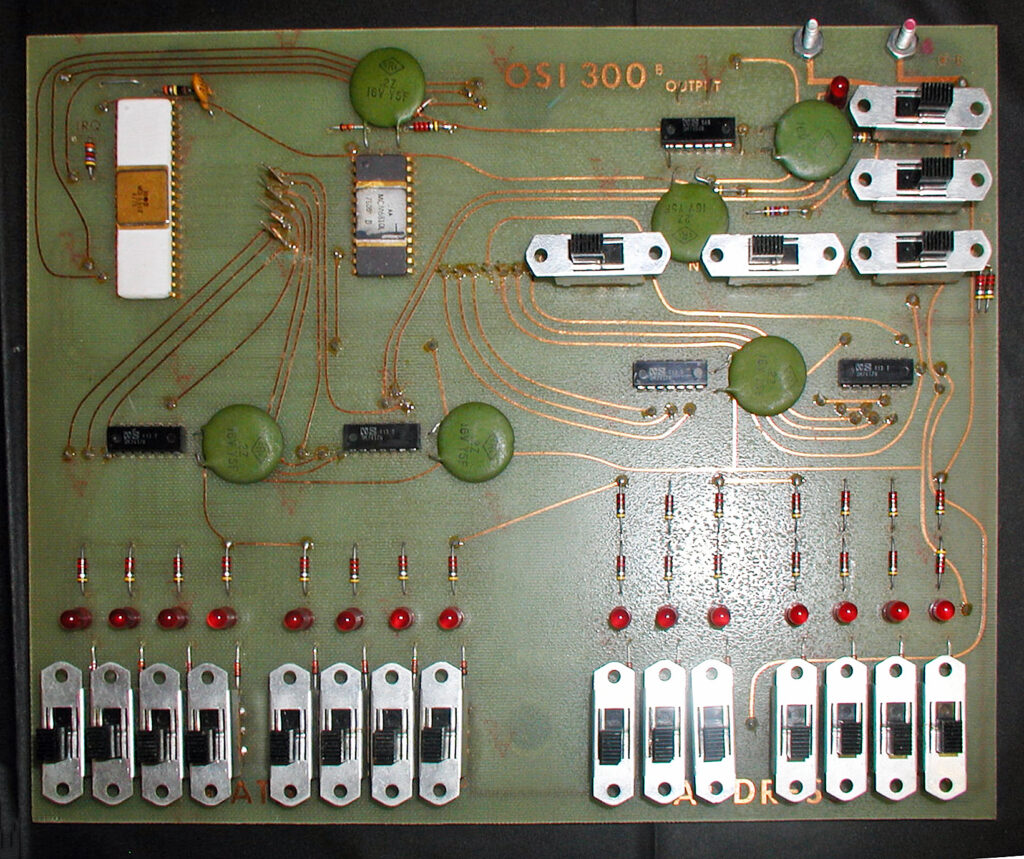