The SYM 1 is a 6502 based SBC and was the ‘big brother’ to the KIM 1. Largely backward compatible with the KIM-1 it offered more memory, a faster tape interface, more ports etc.

SYM BASIC
This came later and is a full featured floating point BASIC with strings and arrays. It didn’t use the built in keypad and LED display but was run from an RS232 terminal device.

The version presented here is V1.1. This version did not have built in SIN(), COS(),TAN() or ATN() but did have the hooks for them to be added by an expansion ROM. These missing trig functions were common in early BASICs and manny still had the string “WANT SIN/COS/TAN/ATN”, or something similar, embedded in them long after these functions were external. 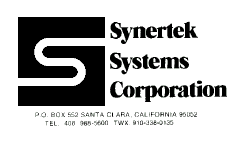 Available here is a binary image of the V1.1 8k ROM (V1.0 was allegedly in two 4k ROMs) and a fully (almost, some bits I never finished) commented disassembled listing that assembles back into that ROM using Tass 1.31.