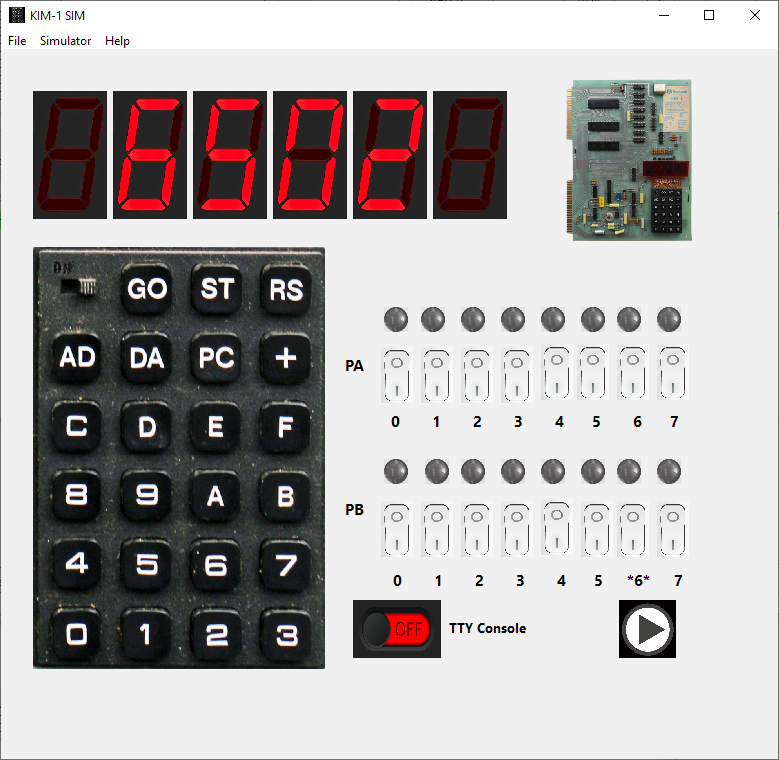 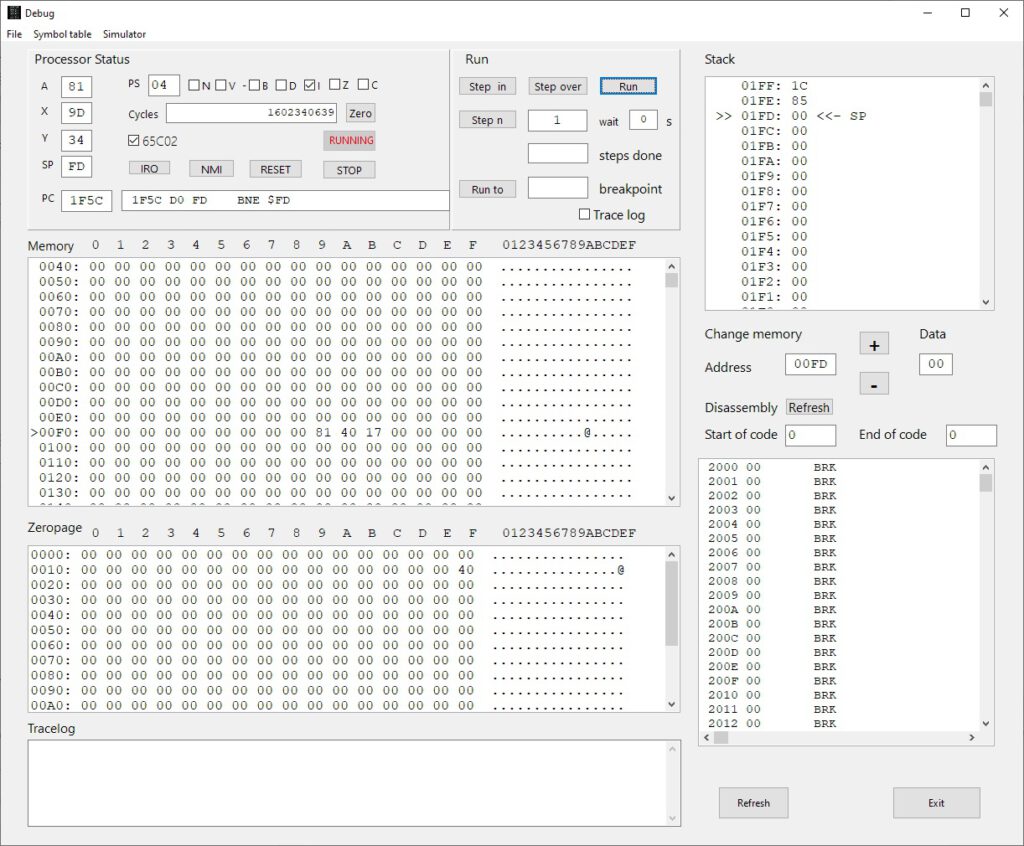 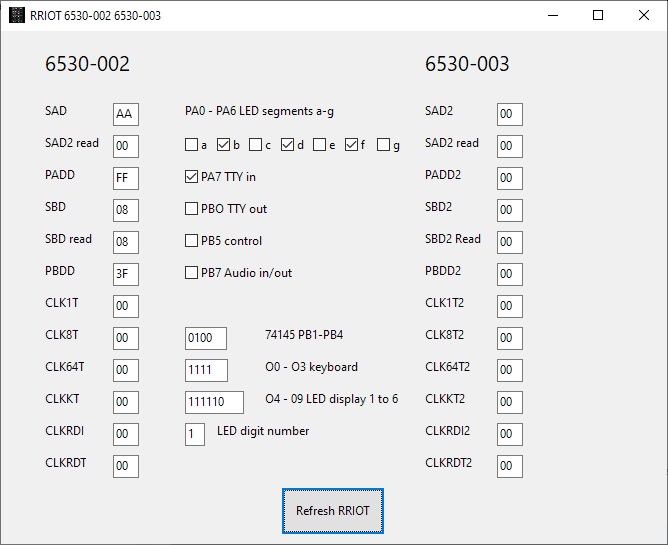 The KIM-1 simulator is written for my personal use to aid me in developing and testing software for the KIM-1. It is not meant to be a cycle exact complete KIM-1 emulation. Instead it shows as much as possible what is happening inside. So do not expect it to run the typical KIM games on the LED and Keypad.
Just for fun and a tribute, it looks and feels and functions as a real KIM-1. The debugger is what the purpose of this program is. The program is developed on Windows 10 (32 bit executable) and tested and compiled also on Raspberry PI Os (a Debian Linux variant).

What the KIM_1 Simulator does not do as the real KIM-1:

To do, planned expansions

Start the emulator main program and push the ‘Run’ icon. Then press the RS key on the keyboard (or type R).
After that the LEDs awake and the keyboard is operational as a KIM-1.

Besides pressing the keys on the KIM keypbaord on sthe screen you can aslo sue the PC keyboard:

The menu has Load and Save functions, you can load and save to many 8 bit binary formats as MOS papertape, Intel HEX, Motorola S record, binary and simple hex.

Press the TTY console switch to let the KIM simulator use a glass teletype in a console window. The standard KIM user interface is shown, see the manual hwo to use.
Note: set the PC keybaord to CAPS Lock, only uppercase is used in the KIM monitor.
Note the menu options to record a session, (Load Text to Console) or play (Save text from Console, followed by Stop saving text ) a text file in the console.
This is in fact the same functionality as a teletype with high speed papertape punch or reader. You can sue this to load and save Basic programs as ASCII text files.

From the menu Simulator choose Debugger to show the debug window. This windows has step/single step/run buttons, shows the registers and flags, zeropage, memory and the stack. The Trace logfile facility may store a trace of what happened.The disassembler part shows a disassembly.

Several refresh buttons let you update the current state of the machine.

First set the PC to the first instruction of the program to test.

Symbol table and the disassembler

The disassembler shows locations/labels in hex format. If the assembler symbol table is available (TASM can produce that as blank delimited list) you can load it and do some symbolic disassembly.
Load and show the symbol table from the menu “Symbol table”

From the menu Simulator choose RRIOT to show a windows with the current RRIOT status or you can enter new values for the various registers.
Press Refresh to update to the current state.
The 6530-002, responsible for the KIM-1 hardware, is decoded to the relevant in/output bits.

Compiling and building the simulator from source

The include files with KIM ROM and 6502 code

If and when the ACIA routines and other routines in the KIM1SIM ROM are altered you need to rebuild the KIM1SIMrom.inc file.
Subfolder ‘romtoconst’ contains the binary of the original KIM ROMS (6530-002.bin, 6530-003.bin) and the additional ROM binary with ACIA routines (kimsimrom.bin).
The .inc files for the compilation of the KIM1SIM, to be placed in the main folder, are created with the program creatINC.exe, a console application (source included here).
Copy the the tree .inc files to the main folder and compile the KIM1SIM program again.

Here you find assembler sources of various tests. Assemble with TASM, included in the folder. See TASM.HTML for information.
It is convenient to compile from an editor like Notepad++, plugin NPPEXEC
with command to create intel hex file

or to create a binary file with

Note that also symbol files are generated which can be read in by the debugger in the KIM-1 Simulator.