Terminal Interface Monitor, short TIM, with codename 6530-004, is a 6530 with a monitor program in the mask ROM. No systems were sold by MOS around it, just a kit with manual and the IC.
The Jolt did use a TIM IC, see the Jolt and Super Jolt page.
The DATAC 1000, a single-board computer based upon a 6502 and a TIM RRIOT, designed in 1976 by Philadelphia Area Computer Society club members Carmen DiCamillo and Roland James.

Information on this page:
– The story of the TIM
– Functions of the TIM software in ROM
– TIM MANUAL JUNE 1976, 1977 Rockwell
– TIM MOS folder and pricelist
– TIM bytes the Apple
– 3 articles from Micro journal on the TIM
– Article on how to expand TIM
– TIM and OSI 400
– Breakpoint routine for 6502s TIM
– Lunar Lander for TIM and Jolt
– A Christmas story about a Tiny TIM, by Joseph Watson
– TIM-2, a recreation of a TIM system with a 6532, Peter Renaud 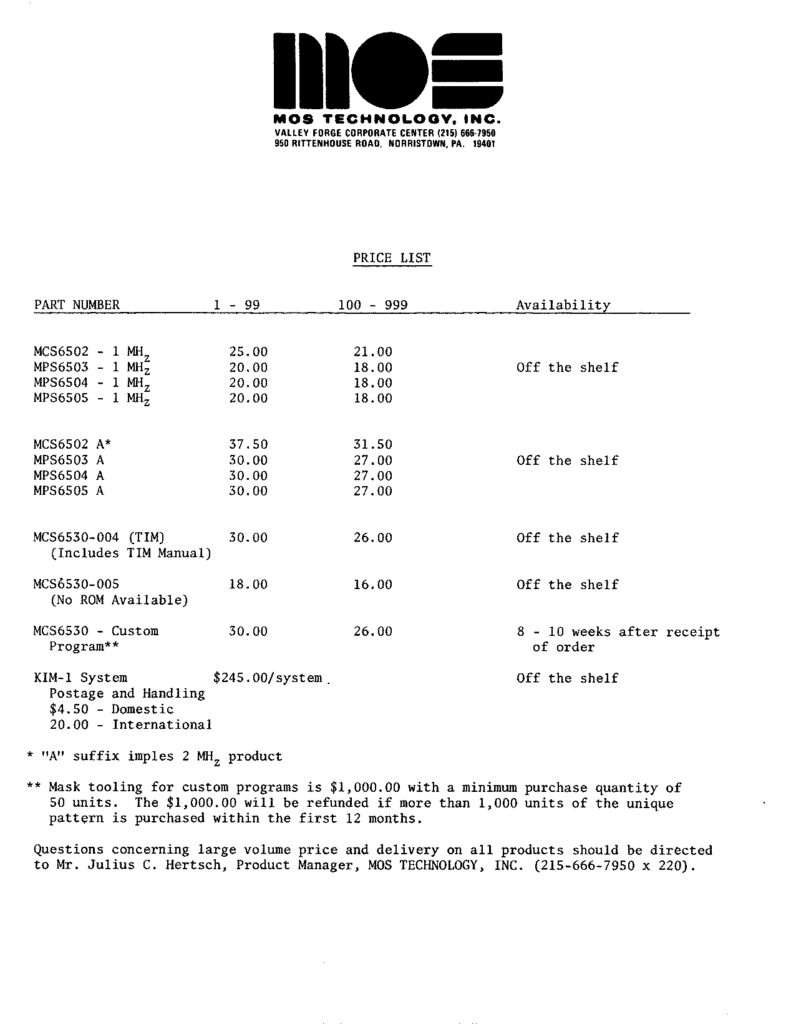 The story of the TIM (from Ch.1.5 of  “On the Edge: the Spectacular Rise and Fall of Commodore”)

The first development system offered by MOS, the TIM IC, was in kit form, which reduced the selling price to only $30. Since the unit was designed primarily to instruct the user on the workings of computer systems in general and the 6502 in particular, MOS Technology contracted Microcomputer Associates of Santa Clara, California to write the unit’s internal program. The two founders, Ray Holt and Manny Lemas, taught engineers how to use microprocessors. Peddle relates, “You have to understand how little the world knew of microprocessors in 1974, ‘75 and ‘76. There were guys making big money selling classes on microprocessors during that time.” Manny Lemas had worked for Peddle during his GE days, while Ray Holt had an impressive background working on the F-14 Tomcat project for the Navy. 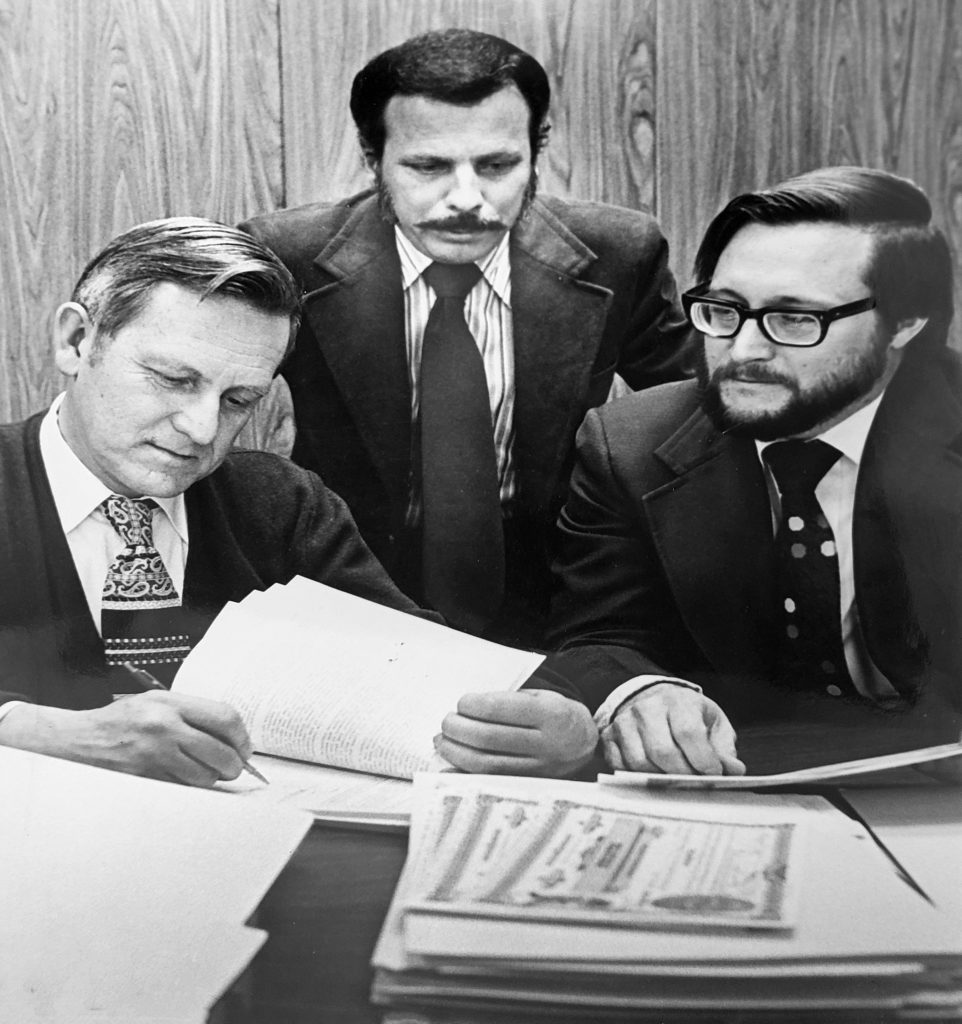 In the middle Manny Lemas, on the right Ray Holt

The technicians developed the system in a special research area on the second floor of MOS Technology. The lab was a room within a room, with a large sign on the door in capital letters warning NO ADMITANCE. Inside, the team stared intently at oscilloscopes or sat over hot irons soldering components onto circuit boards. Small pieces of circuitry were scattered chaotically across the room. Since the 6502 microprocessor and supporting chipset contained almost everything necessary for a computer, the design was minimal. When assembled, it could be connected to a teletype machine or a computer terminal.

The biggest job was programming the built-in ROM code for the computer. This consisted of a debugger and monitor program, appropriately called the Demon. According to Peddle, Demon was programmed by Manny Lemas and Mike Quarter, who previously developed Peddle’s time-sharing system. The programmers used this time-sharing system to develop the code, which they burned into a 6530-004 RRIOT chip. This little powerhouse included RAM, ROM , I/O and timer capabilities. 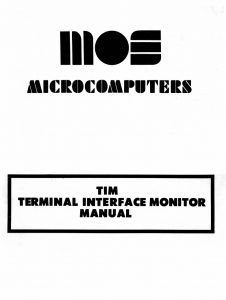 The system was named simply. Peddle and his team liked acronyms, thus the Terminal Interface Monitor, or TIM was christened. TIM would begin a predilection at MOS Technology and Commodore for assigning friendly three-letter names to their products.
Those ordering the $30 development kit received the grey-ceramic 6530-004 chip and a manual consisting of 14 sheets of 11×17 paper, folded and stapled in the middle. Included in the manual were a suggested schematic, the TIM monitor commands, a few sample programs and a listing of the monitor code. It was up to the user to provide the resistors, transistors, capacitors, wire, and even the 6502 microprocessor.
Though receiving a computer in the form of a kit does not seem particularly user friendly now, hobbyists at the time clamored to build their own computer. Nonetheless, a good portion of the kits failed to operate upon completion. Rather than using a prepared circuit board, many buyers simply wire-wrapped the chips together on a piece of generic perf board or prototyping board, often termed a kludge board. After placing the required components on the board, builders hand wired the chips one pin at a time, resulting in a snarl of fine multicolored wires. Once the chips were in place, the user then had to construct or purchase a separate power supply for the TIM. Finally, the TIM was (as the name suggests) able to interface with a standard ASCII terminal or teletype machine.
As hoped, the do-it-yourself nature of the kits spawned familiarity with the products, and once hobbyists had invested time learning about the chip, they often remained loyal to the 6502. Many hobbyists ended up using their TIM computer as a small development system, since it was ideal for creating small programs. For their part, MOS Technology continued to sell TIM computer kits to diehard hackers, even after the Commodore acquisition. Ultimately, TIM was just a stepping-stone to developing and marketing a fully assembled computer.

Functions of the TIM software in ROM

I know of several commercial systems using the TIM:
– The Jolt and Superjolt, Microcomputer Associates/Synertek (also information on the origin of the TIM-1 program!)
– the first Brutech BEM bus system, A small dutch company, Vinkeveen, that produced professional 6502/6809 and more, industrial systems. 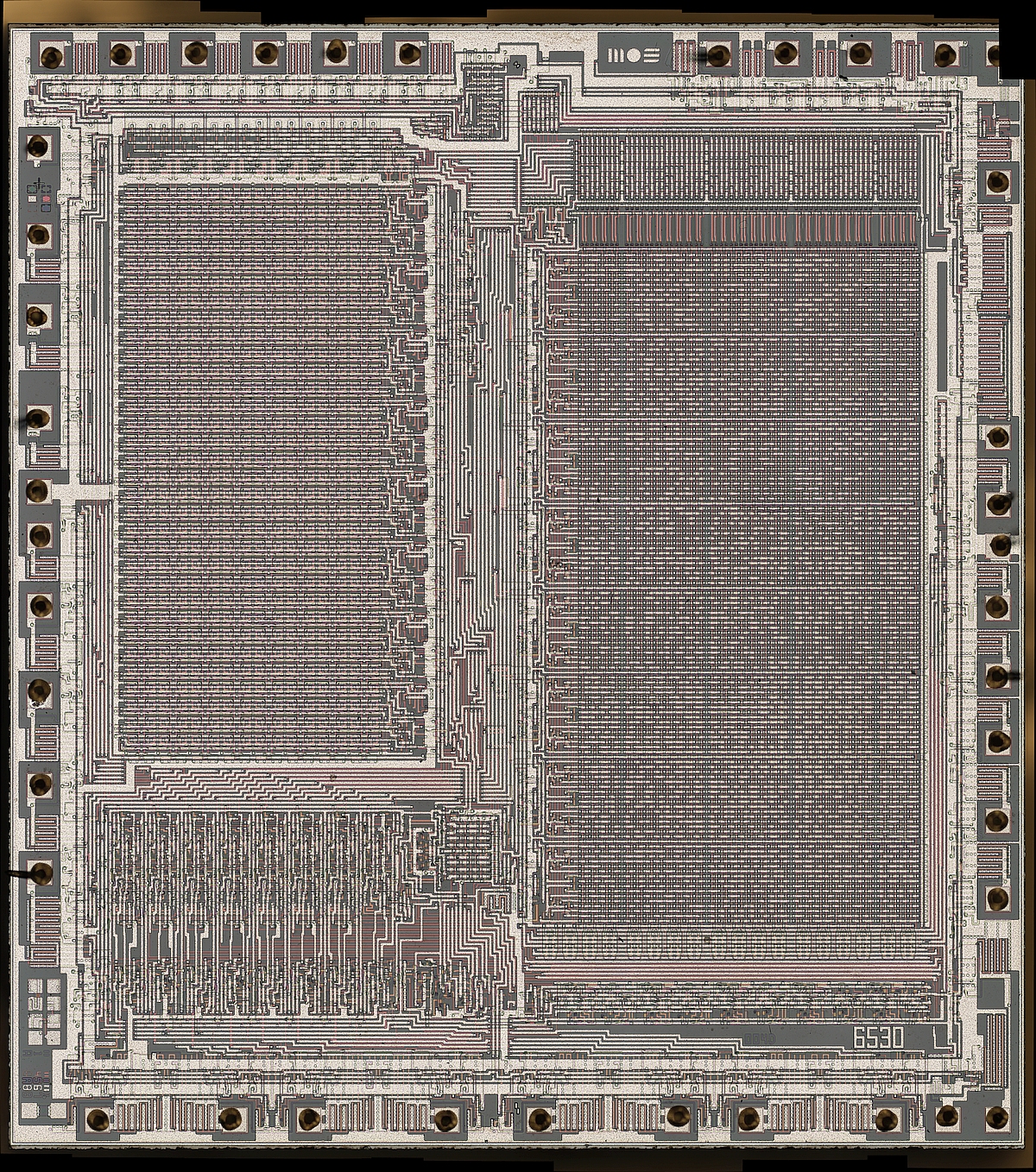 And here the machine readable and ready to assemble source, listing and binary  of TIM (Thanks Martin Hoffmann-Vetter) 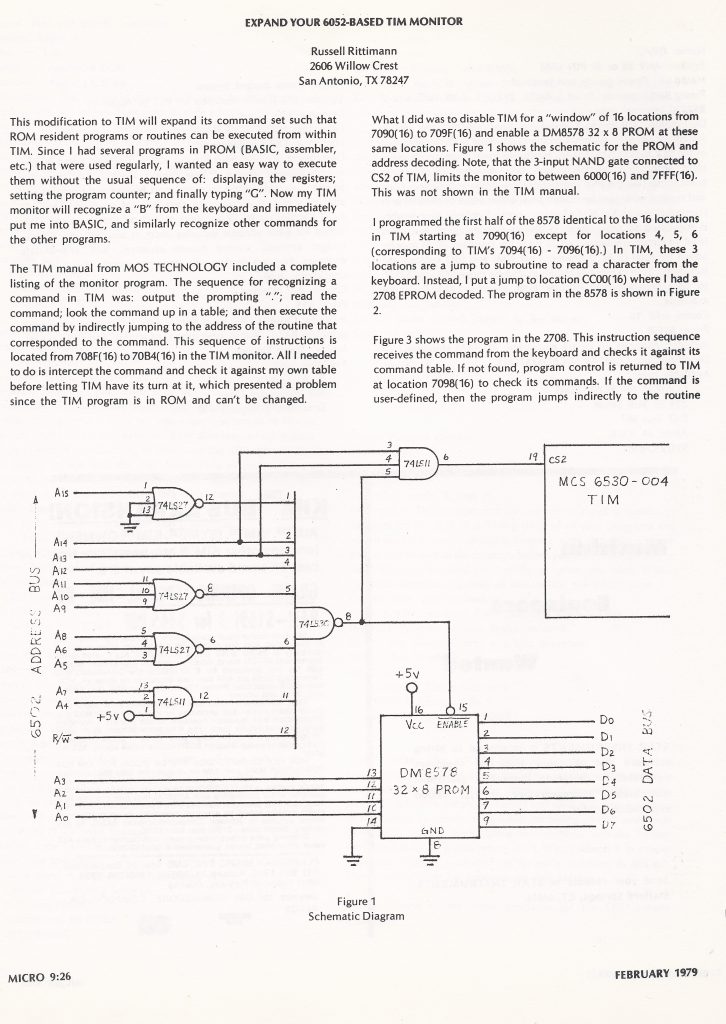 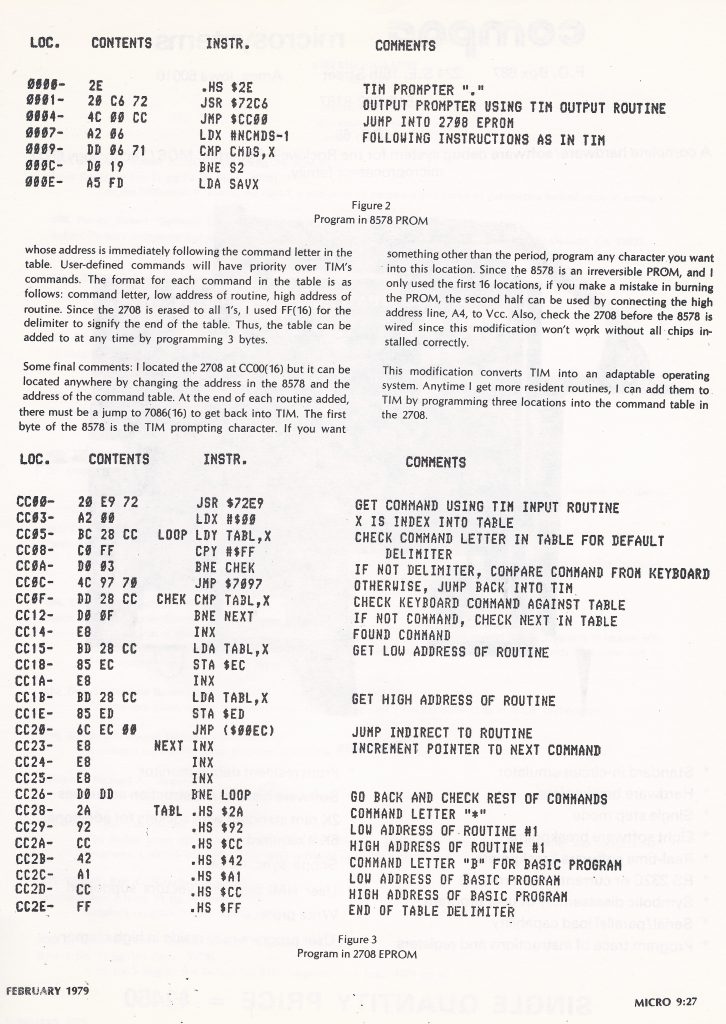 For those of you that would like to have hard copy capability and much better control over program development on the Apple 1, the following hardware addition will accomplish it.
Using a 6530-004 (‘TIM’ chip) costing about $12.00 gives many superb features such as a variable baud rate serial input/output, a high speed parallel input (high speed paper tape reader), an excellent breakpoint processor, paper tape dump and load routines, etc.
The TTY port is located at locations 6202H and 6203H. Date at that port should be 00H and 16H respectively. The baud rate is stored at 00EAH and 00EBH and 110 baud is represented by 10H and 46H at those locations. It’s a fun addition to the Apple 1. Try it!
Fred Hatfield K8VDU 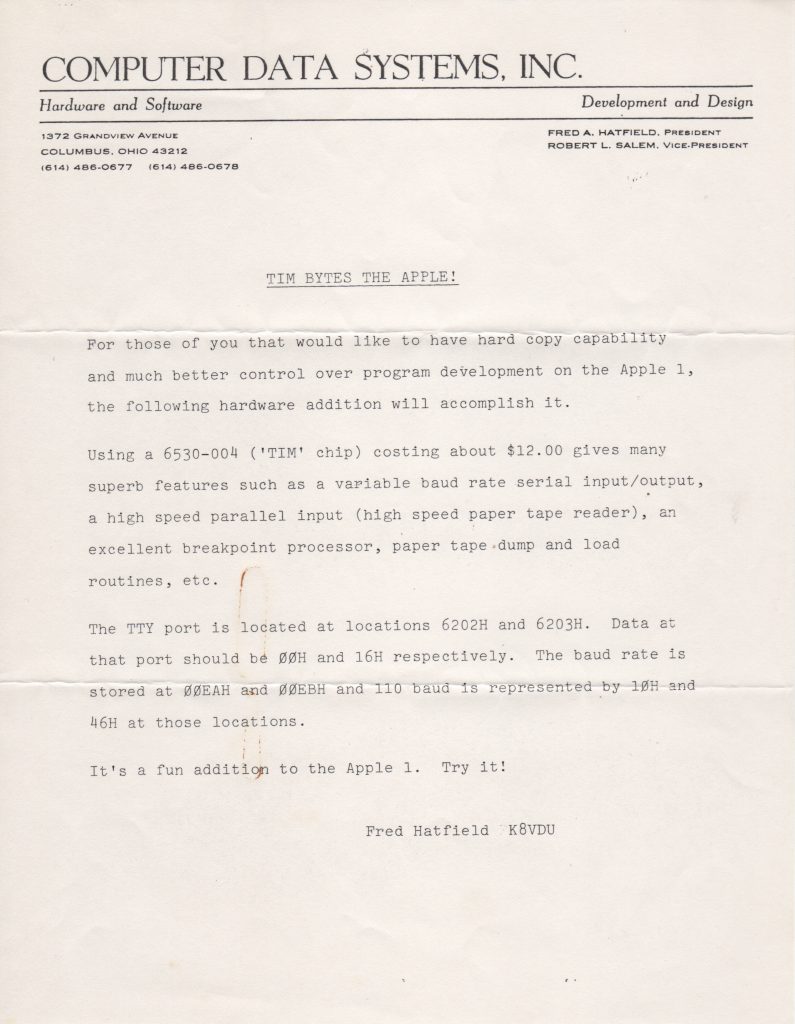 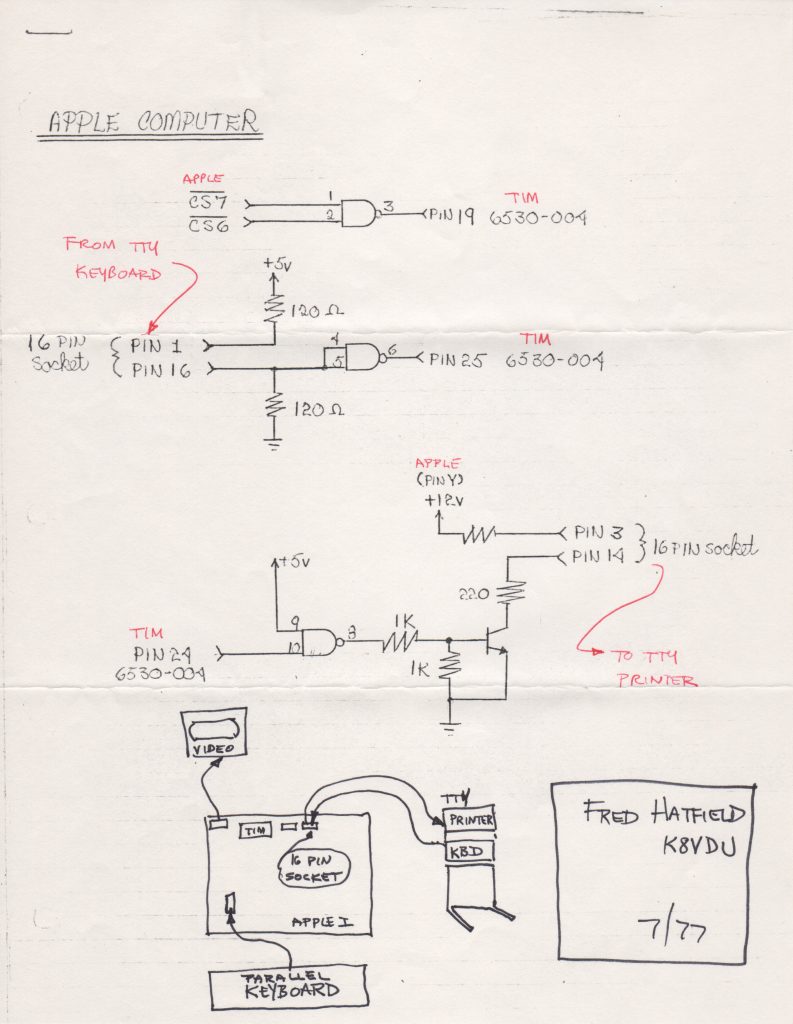 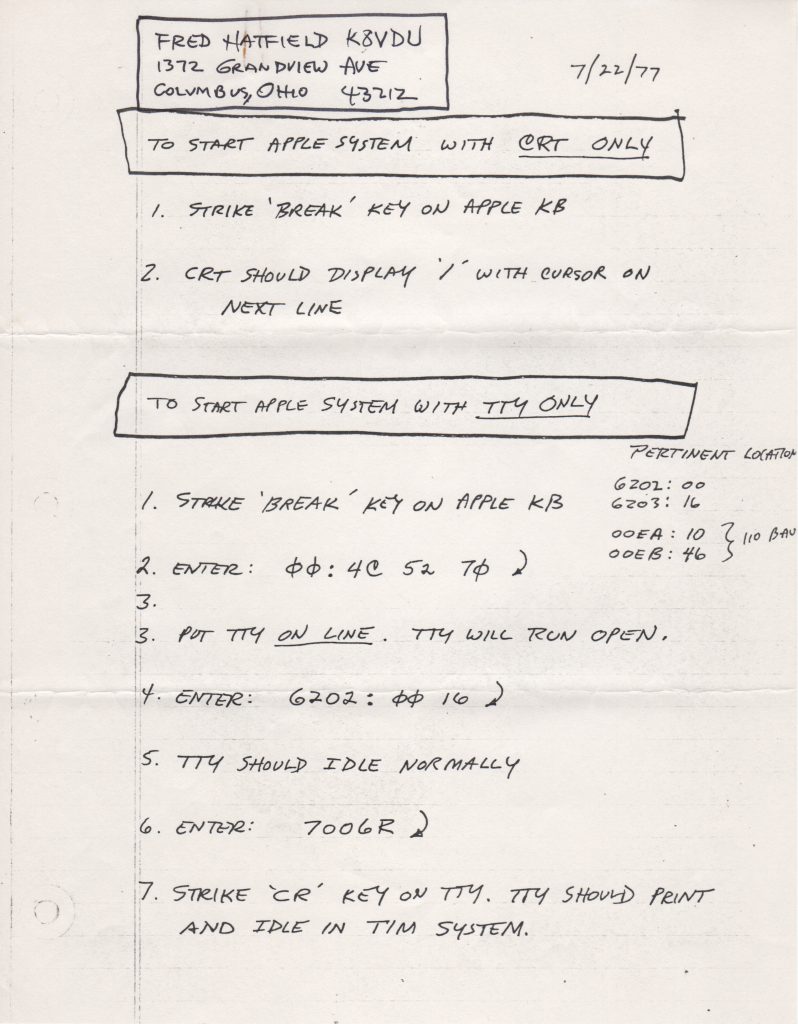 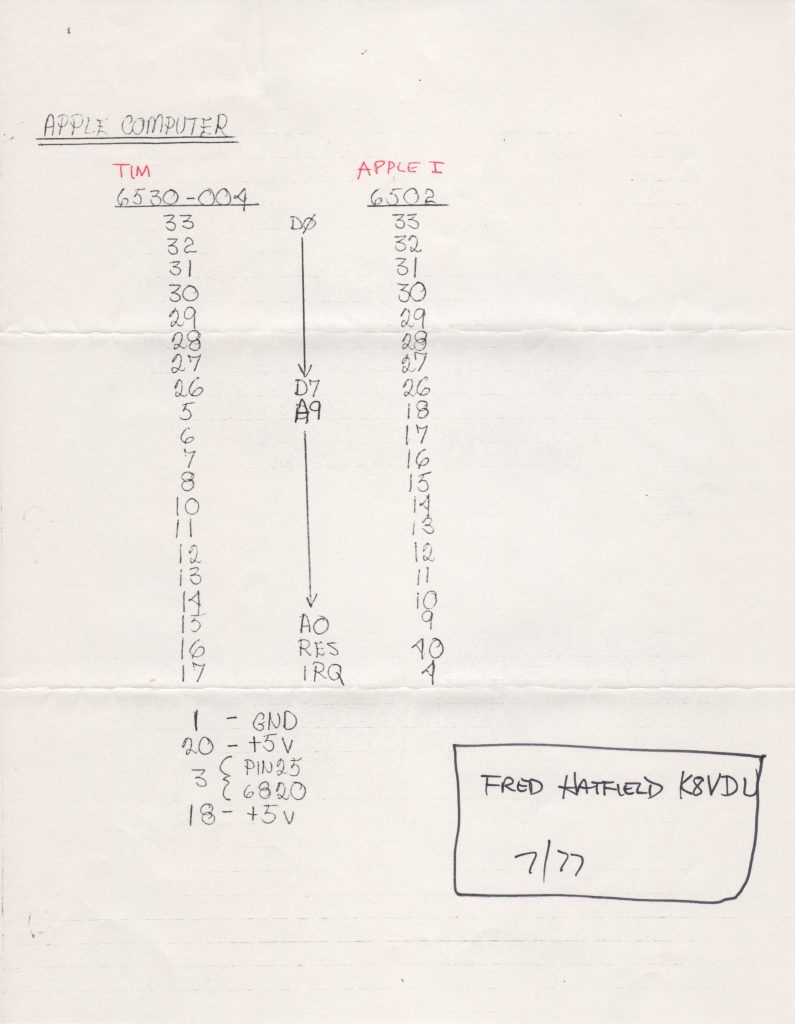 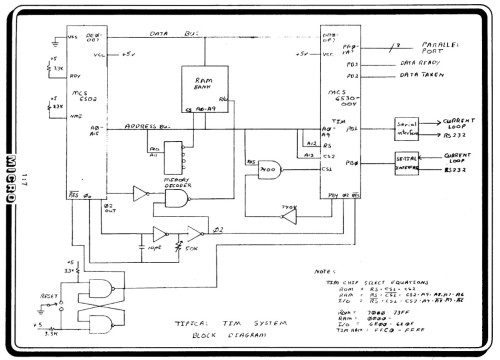 Application note by OSI how to add a TIM to an OSI 400 board. 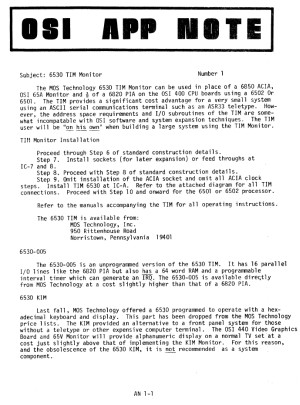 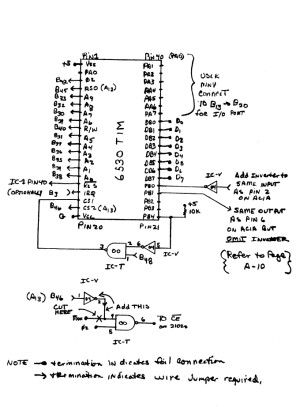 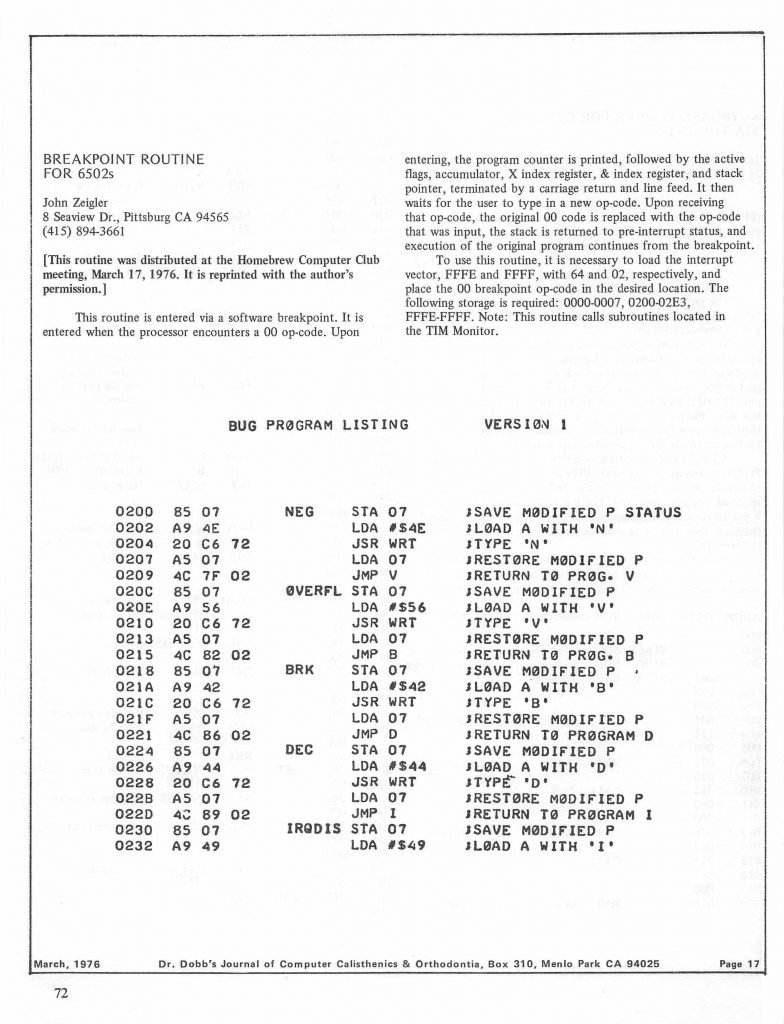 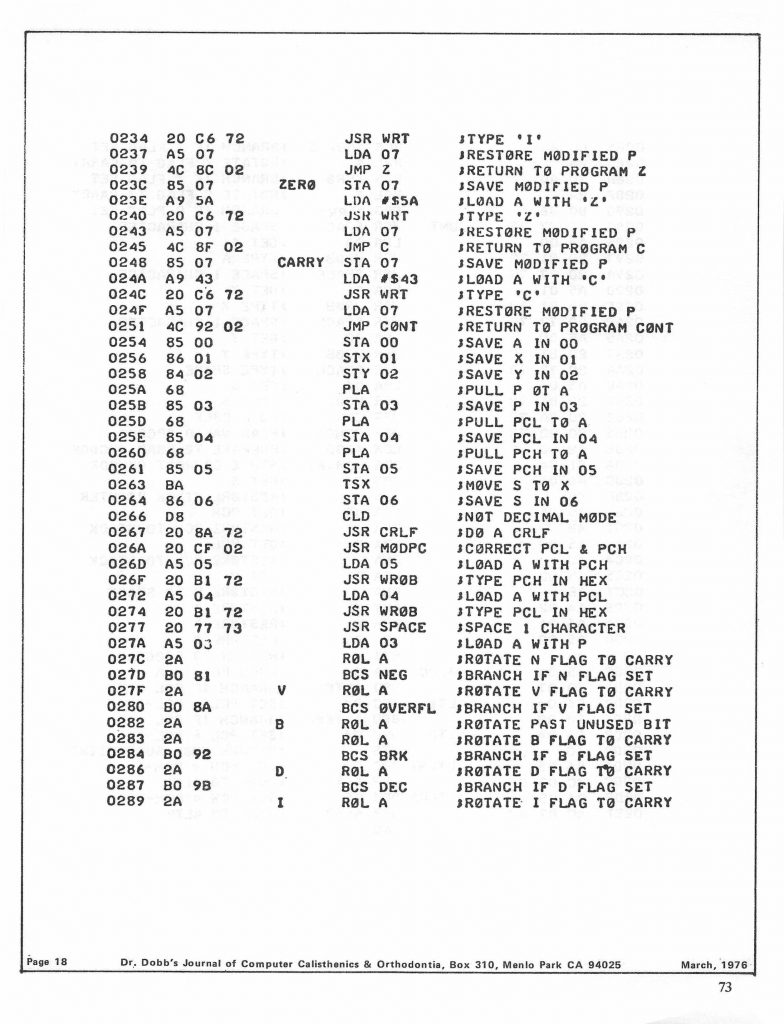 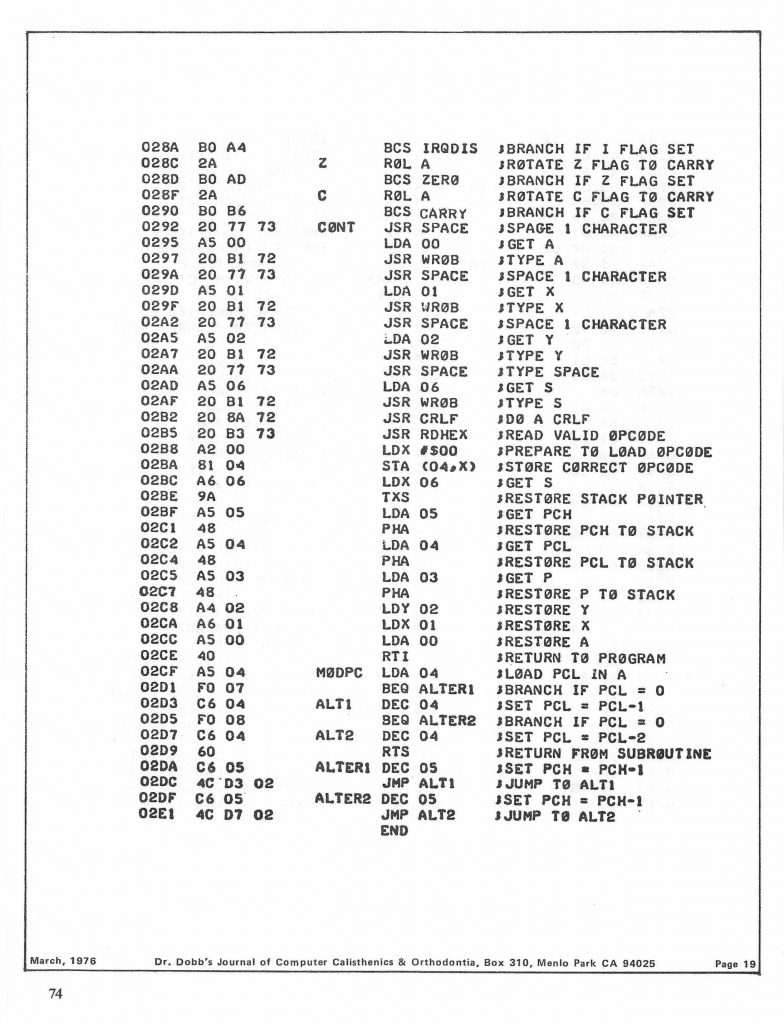 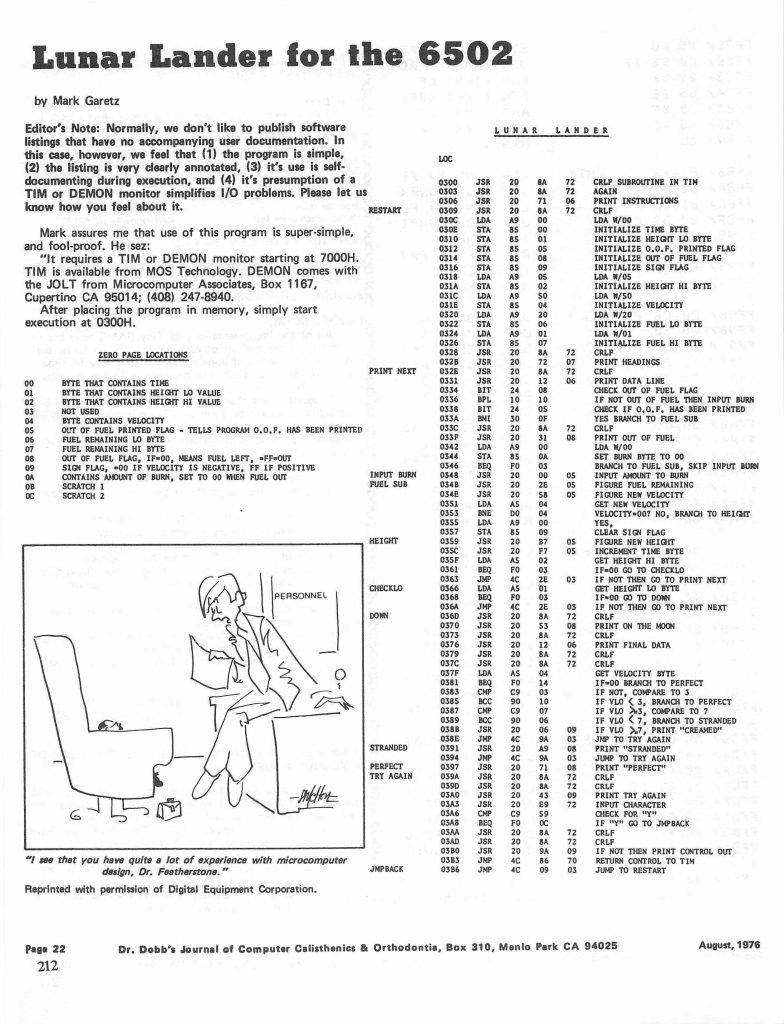 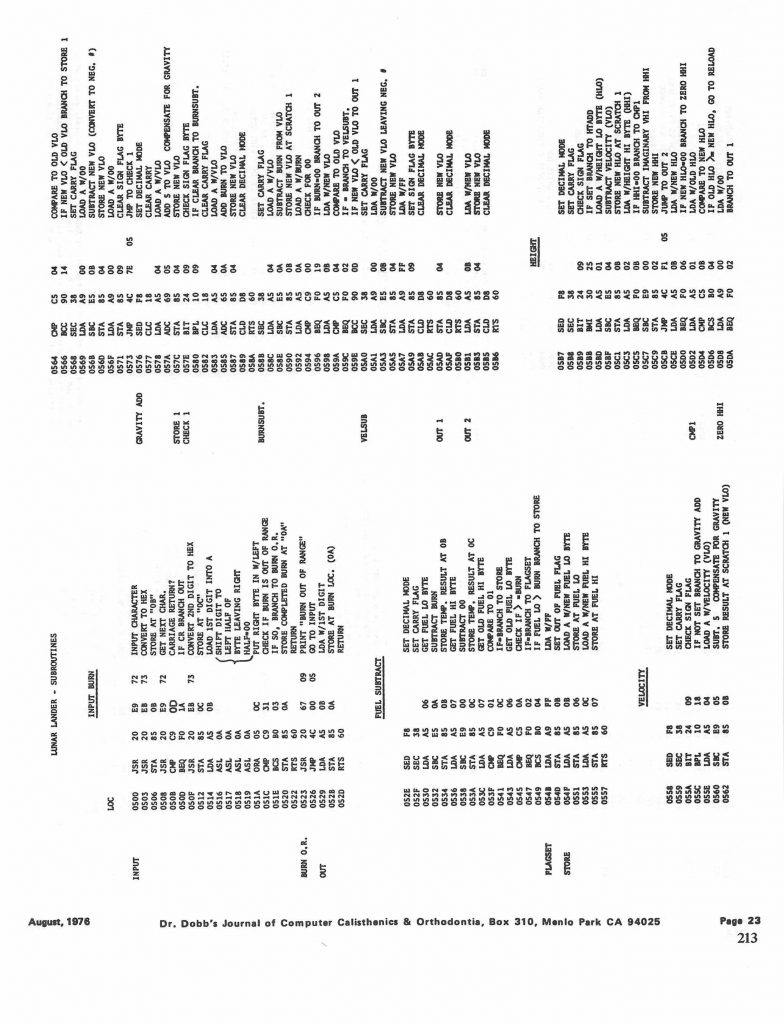 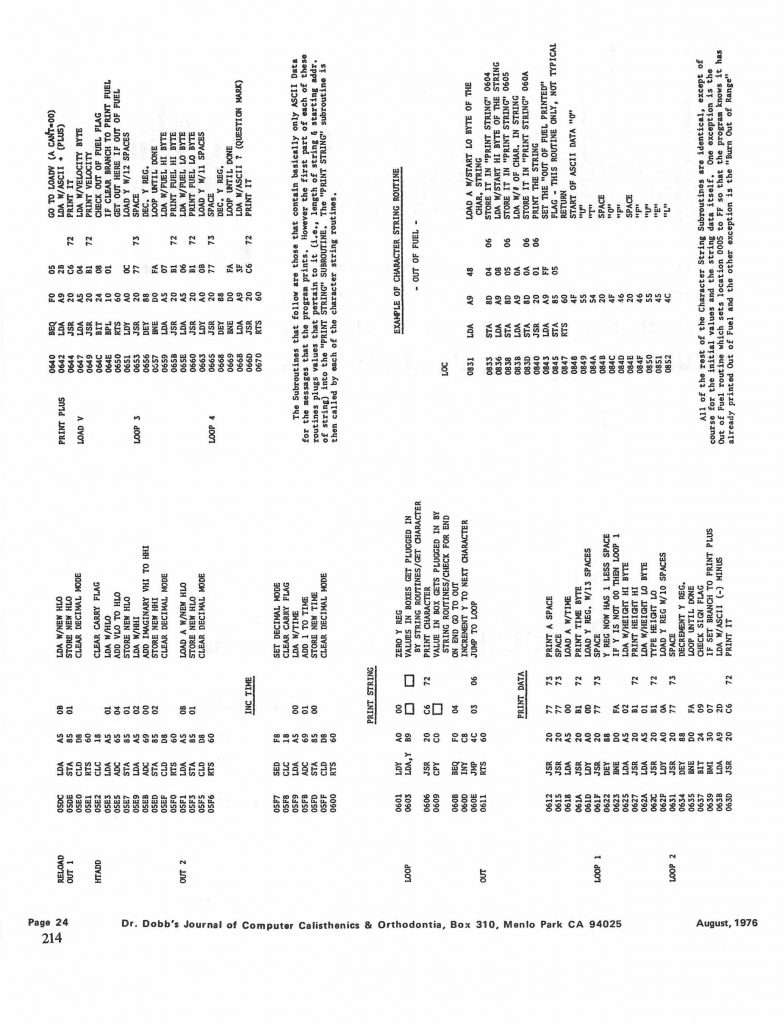 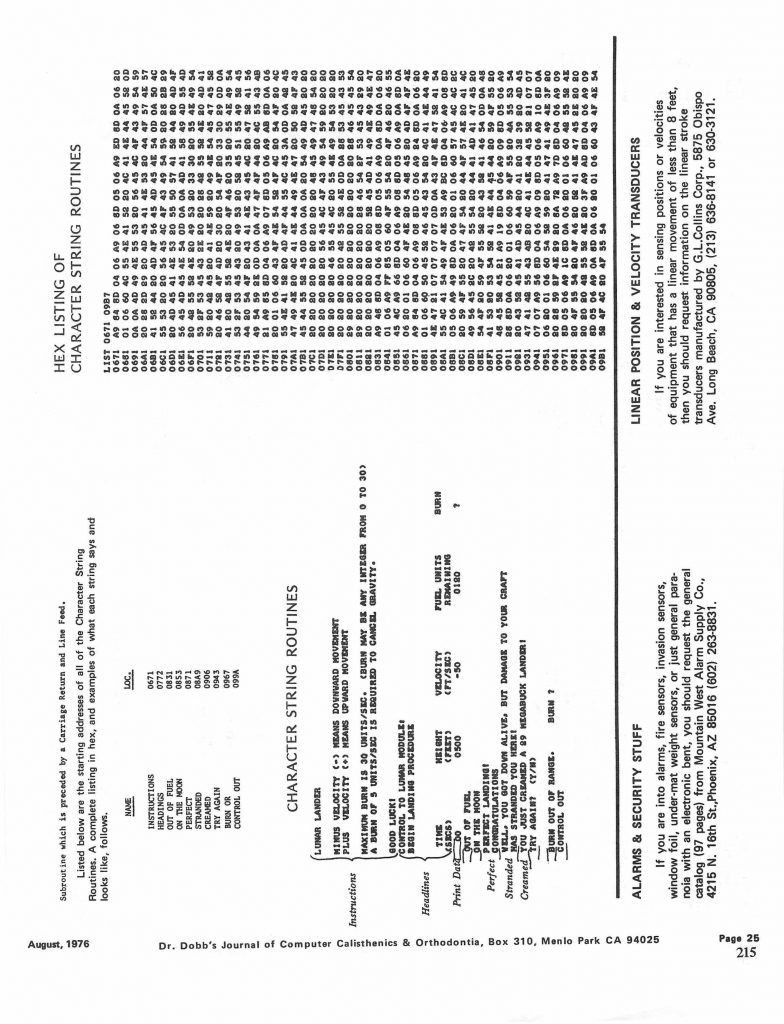