With the intriquing name SUPERKIM an engineer called Paul Lamar designed a SBC around the 6502.
The main design decisions were to be a superset of the KIM-1, requiring no alteration of KIM-1 programs or user interface (the keyboard/display!) but with much more extendable resources. And the result is just right, it Is a KIM-1 with many improvements!
I have never seen this system in real life here in the Netherlands, only advertisements in the then current, dedicated to the 6502, magazines.

The heart of the system is the 6502 at 1 MHz and the well-known KIM-1 RRIOT’s 6530-002 and 6530-003,  the six  seven segment led  displays, a keyboard equivalent tot the KIM-1, the cassette interface and RS-232-C serial interface.  Extra are 4kRAM (from 1K on the KIM-1), 4×6522 VIA’s, 8K EPROM , all socketed and not populated by default. A 8 bit priority encoded IRQ and space for wire wrapping on the board. Also included are fully decoded address map lines, tri-state buffers for address and data bus on wire wrap headers and a power supply for 12V, 1A input ging 5V and 12V.

The KIM-1 ’emulation’  is complete, since the KIM-1 6530’s are there, at the default location and relevant KIM-1 hardware like seven segment display and keyboard, audio cassette interface and tty interface and edge connector. 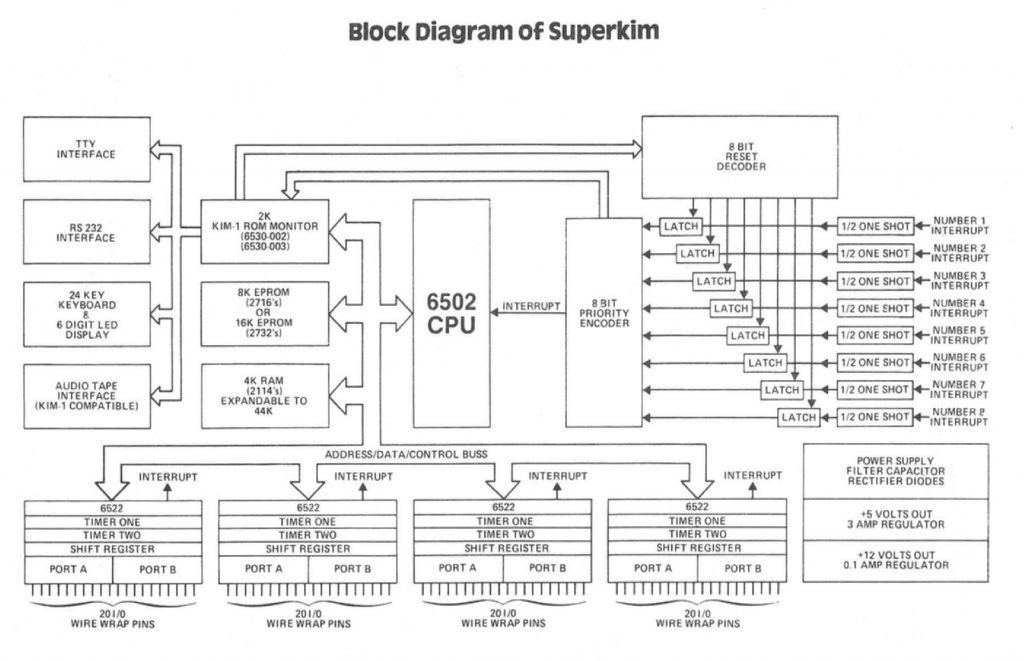 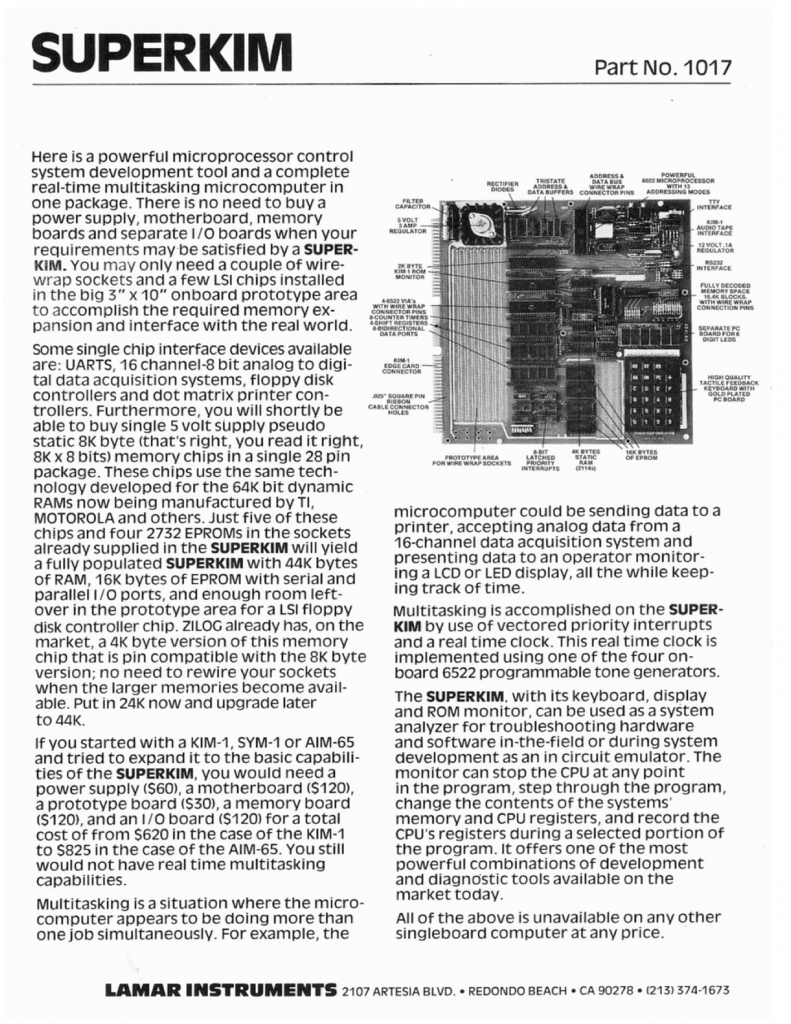 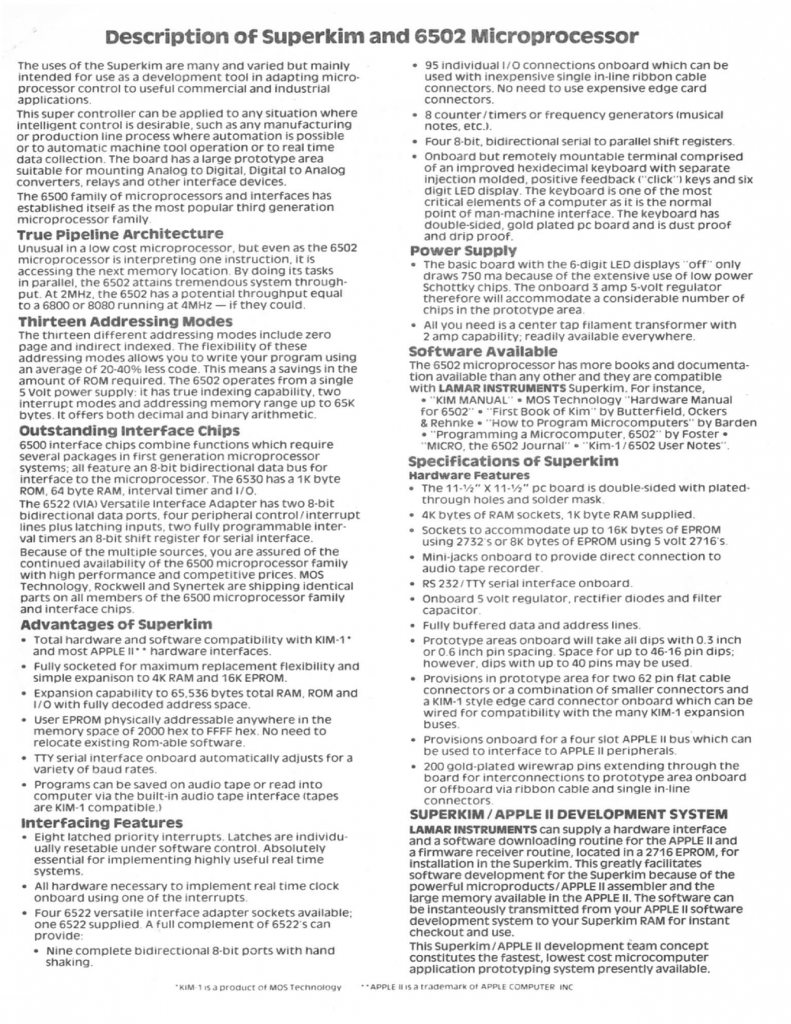 The SUPERKIMwas sold by Microproducts as shown in this advertisement page in the magazine Micro, issue 13 June 1979: 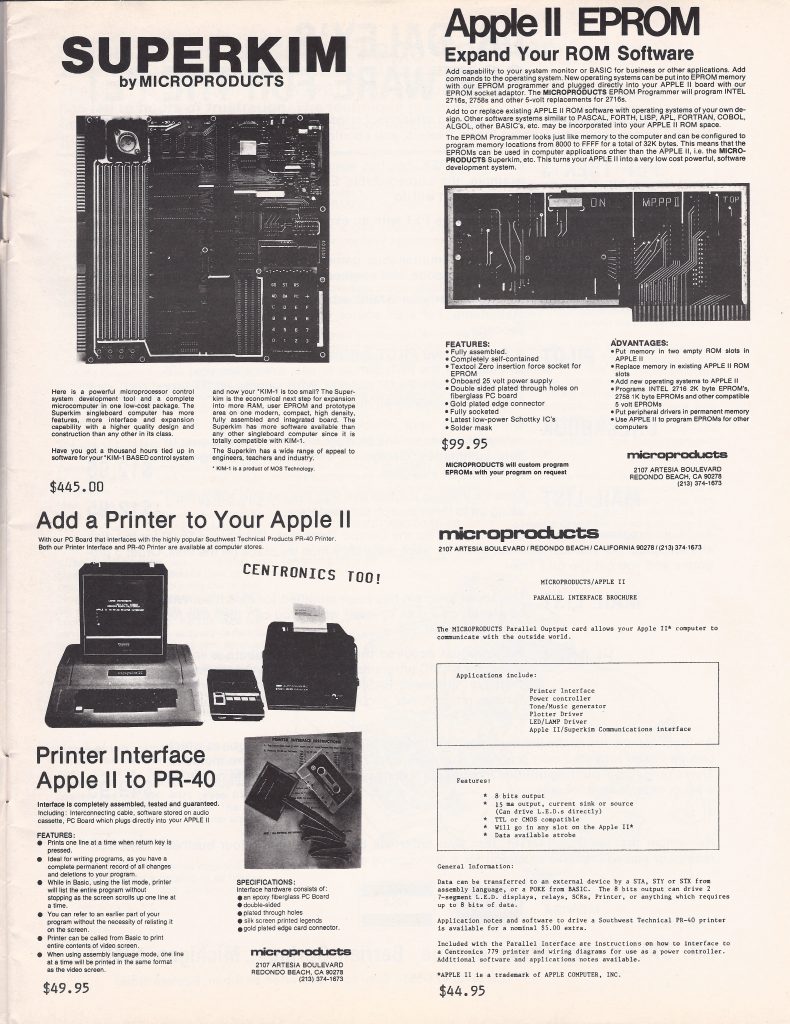 Paul Lamar initially developed Road Test Systems with the KIM-1 and the limitations in resources made him develop the SUPERKIM. 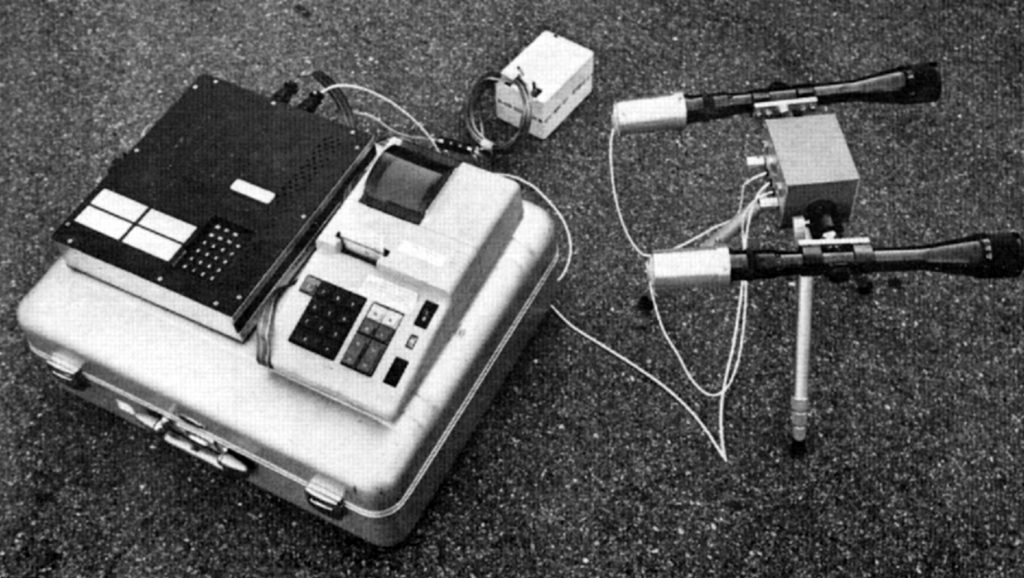 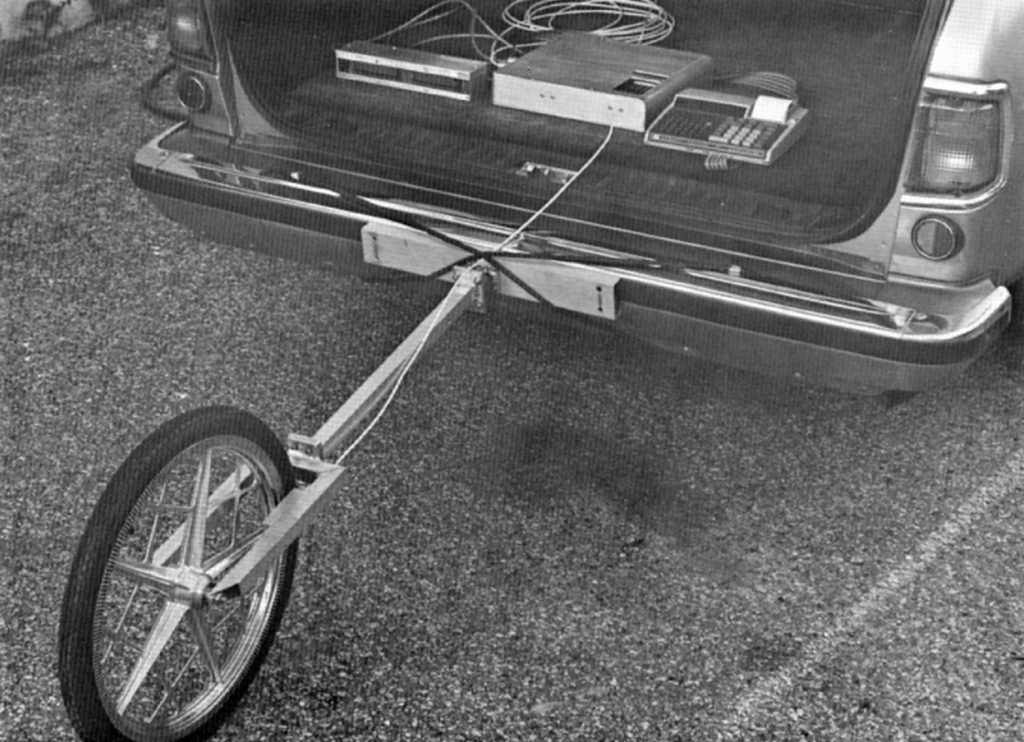 Articles describing the use of the SUPERKIM in robots and Road Test systems:

Articles about the Computerized Road Test System from Lamar Instruments

From the blog of Dennis Simanaitis:

I came upon some photos summarizing automotive testing as practiced when I arrived at R&T in the late 1970s. One photo brought back memories of the excitement, the technical expertise, the glamor.
Weighing a test car, c. 1979.
We weighed our test cars at a local builders supply. The idea of having our own scales capable of obtaining individual corner weights was far off in a digital future. Rough and ready though the scene appeared, the supply-yard scales were California-certified and nearby.
Track testing took place at Orange County International Raceway, a local drag strip with abbreviated road course. A fabled place: Bob Bondurant used it for his first driving school, opened in February 1968. The second week, Bob had two students: actors Paul Newman and Robert Wagner, both preparing for the movie Winning. P.L. Newman continued, racing and winning.
In 1977, R&T’s John Dinkel, my predecessor as engineering editor, asked a fellow named Paul Lamar whether any new computerized gizmos might be employed in gathering acceleration and braking data. 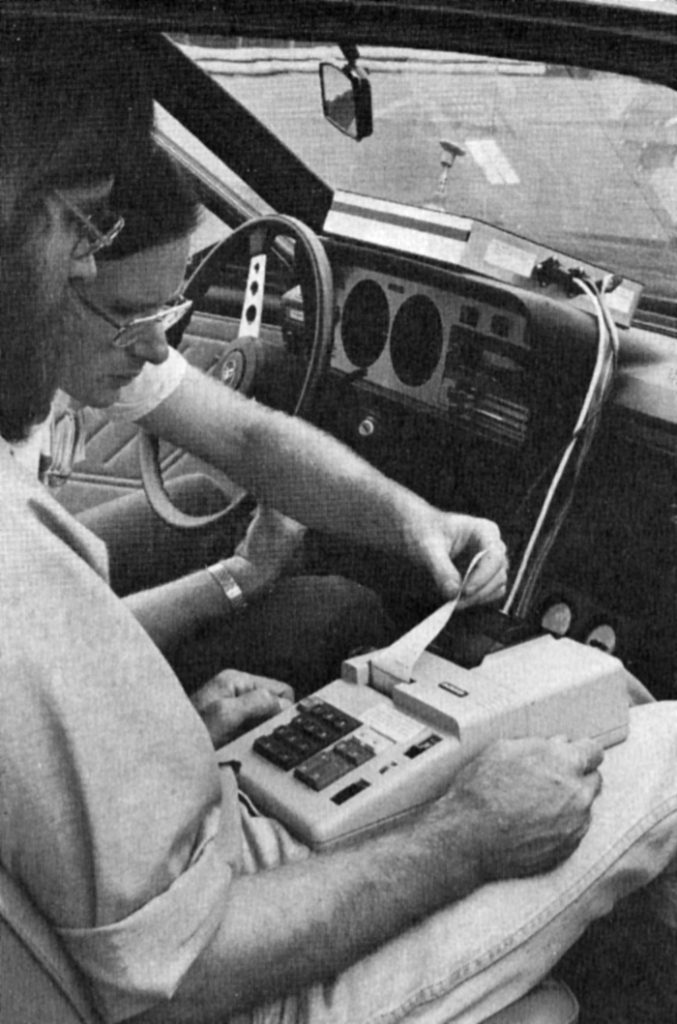 John Dinkel, at the wheel, and Paul Lamar examine computerized data. (That’s their story; and they’re sticking to it.) This and other images from R&T, May 1977.

Paul is a cool guy. Beginning in 1966, he worked with Texan Jim Hall in developing the Chaparrals 2C, 2D and 2F. (Paul was responsible for most of the body design of the 2F.) After that, he set up his own company doing race car development and equipment design. For a long time, he has been active with aircraft applications of Mazda rotary engines, at a website proudly “Powered by Linux!”

Back in 1977, Paul said to JD (as Dinkel was known), “I recommend you consider a microprocessor. It’s the coming thing in electronics.” Paul followed up on his recommendation with devising the first computerized test equipment used by an auto magazine. Hitherto, acceleration testing was a two-person task, one driving, the other punching an array of stopwatches based on measurements of a bulky 5th-wheel.
Another gizmo, the sainted R&T Tapley Meter used to give impressive data with which we younger readers were highly impressed (“Wow! Off-scale!”), though we never really understood what it was measuring. (It turns out the Tapley Meter was a pendulum-driven accelerometer.)
When I began at R&T in early 1979, Paul’s computerized black box became an everyday part of my track testing. Its heart was an MOS Technology MCS 6502 Microprocessor Array. 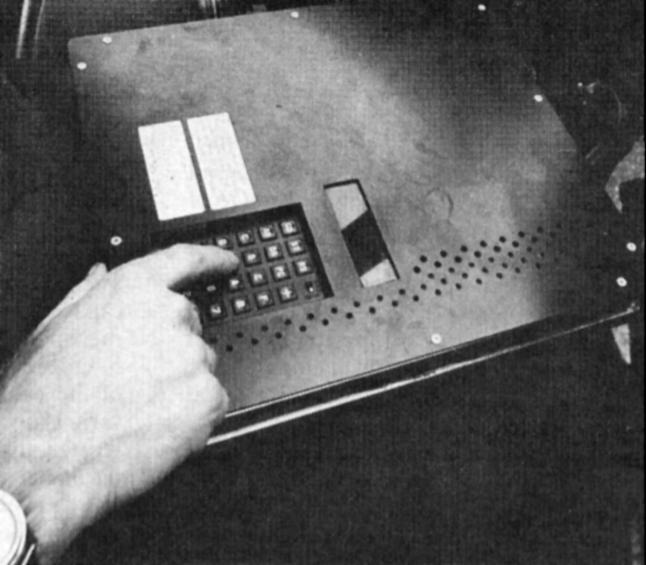 The “sixty-five-oh-two” was pivotal in the computer industry: Its price was one-sixth that of comparable products and brought about a rapid decrease in competitors’ pricing and a dramatic increase in microprocessor availability. In retrospect, it likely had the computing power of a toy digital clock operated by a potato battery, but at the time it was state-of-the-art.
The Lamar black box had a keyboard for programming. (How’s your base-16? Mine is sketchy at best.)
The Lamar black box’s keyboard was one of its ways for entering a program—in hexadecimal (base-16) code! Fortunately, once debugged, the acceleration and braking programs were stored on a separate Sony
cassette tape recorder and played back into the 6502 when changing from one test to the other.
Alas, the black box had insufficient memory to store them. Also, reprogramming turned out to be occasionally heat-sensitive: I would do the acceleration testing, say, then turn on the car’s a/c to cool off the interior for a bit. Only then would the Sony convey its bops and beeps successfully to the black box.
The 6502’s liquid crystal displays gave information on time, car speed and distance traveled. The Sony cassette tape recorder to its right swapped the 6502’s programs.
Sensitive though it could be, the setup was more accurate than stopwatch-punching and it was a one-person operation. Results were printed on a strip of paper by a separate device, a modified Addo desk calculator residing on the passenger seat. (Paul’s second-gen black box had a built-in printer and enough memory to eliminate the pesky reprogramming.)
Typical results from a separate printer, a modified Addo desk calculator.
The Lamar 5th-wheel was decidedly easier to use than its traditional counterpart. It weighed 20 lbs. versus the clunky one’s 40 lbs. and attached with bungee cords, not potentially bumper-damaging clamps.
The Lamar 5th-wheel compared favorably with its traditional counterpart. It could also be disassembled for shipping.
In 1986, I documented our testing procedures in a presentation to the Society of Automotive Engineers, SAE Paper 861114, “A Magazine’s View on Automotive Testing.” The paper was accompanied by a short film completely produced by R&T, a story in itself. This was back before video cameras—and ages before smart phone imaging.
R&T’s Cecil B. “Joe” DeRusz shot the flick using an Arri Arriflex 16-mm camera, the best of its kind, rented from a Hollywood outlet. We had a vague shooting script based on the technical details of the SAE Paper. But I have vivid memories of Rusz figuring out angles, the entries into frame and exits out of it. I recall we produced the film in a few days of on-again/off-again shooting. Likely over budget. There were lunches after all.

In a two part article in the magazine Robotis Age 1980-1981, Don McaAllister describes the interfacing an programming of the SUPERKIM for the control of the Lour Control ET-2 robot shell. 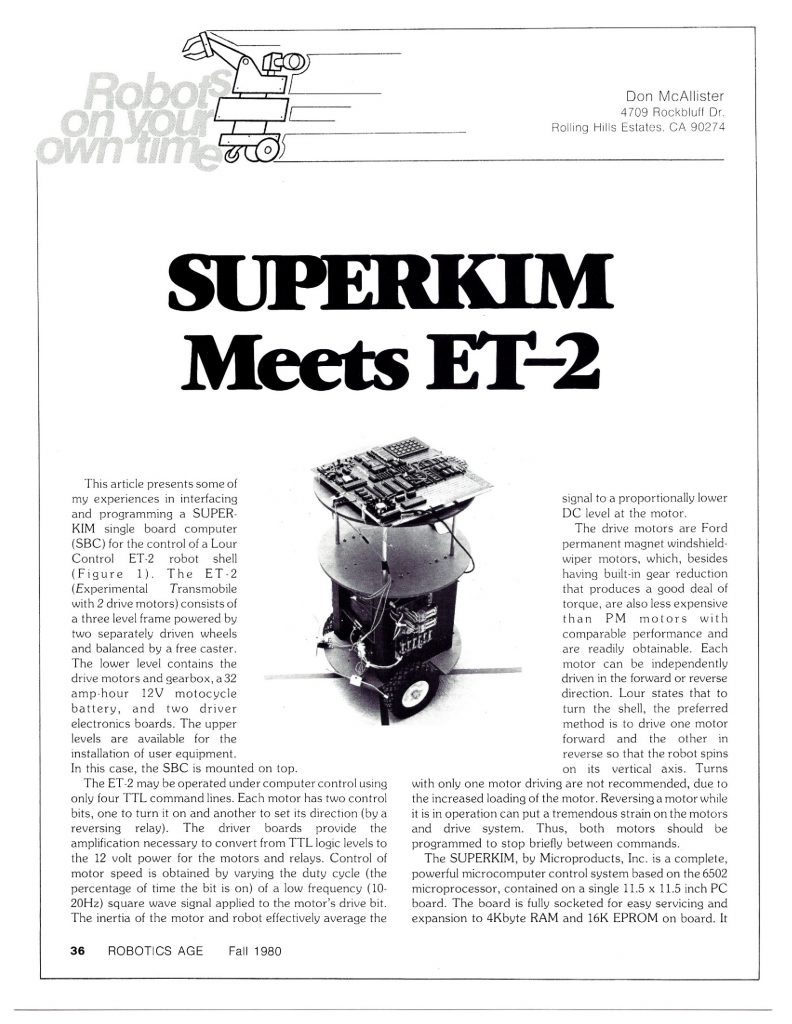 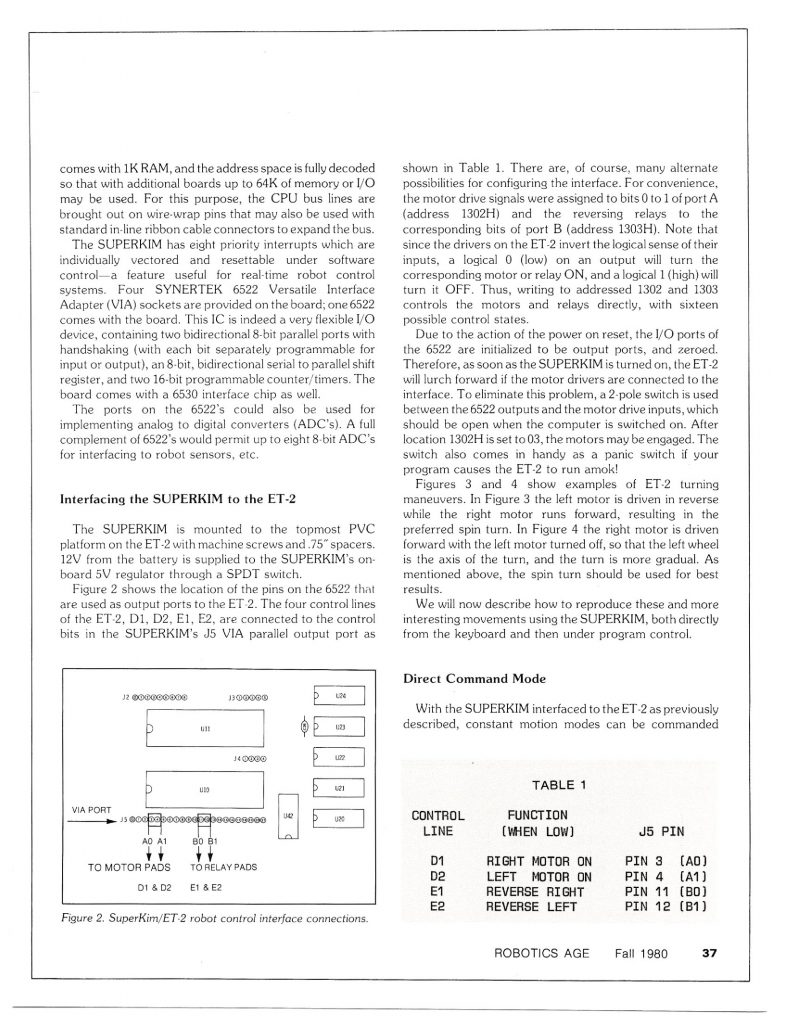 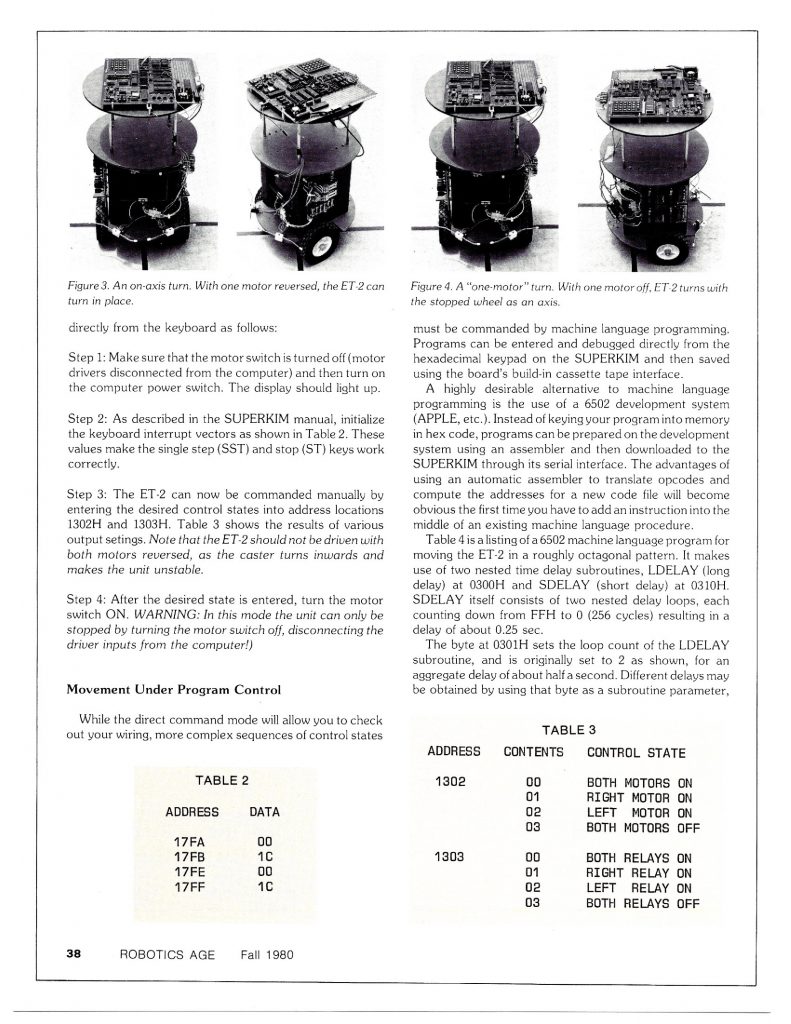 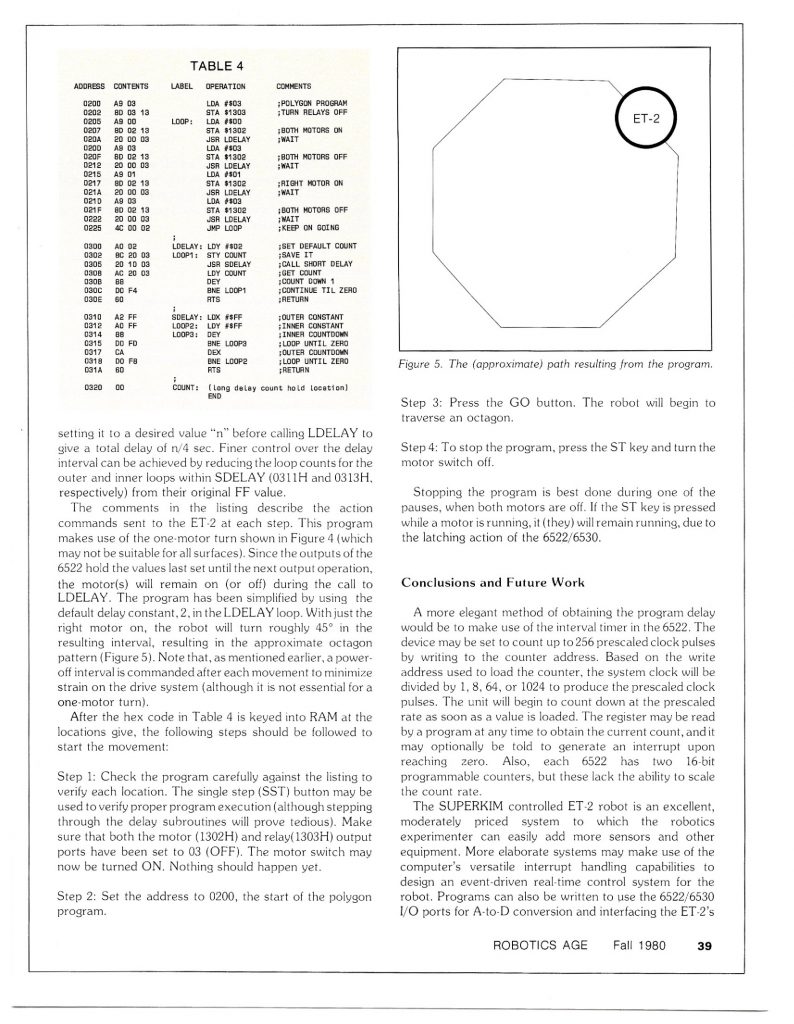 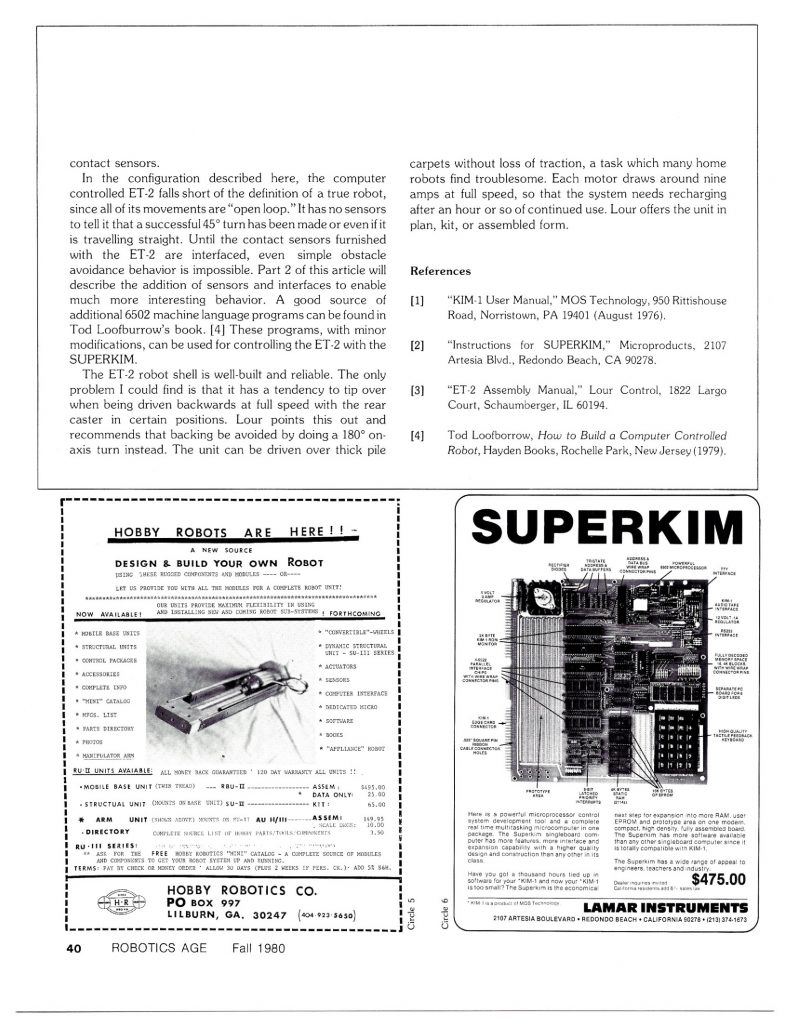 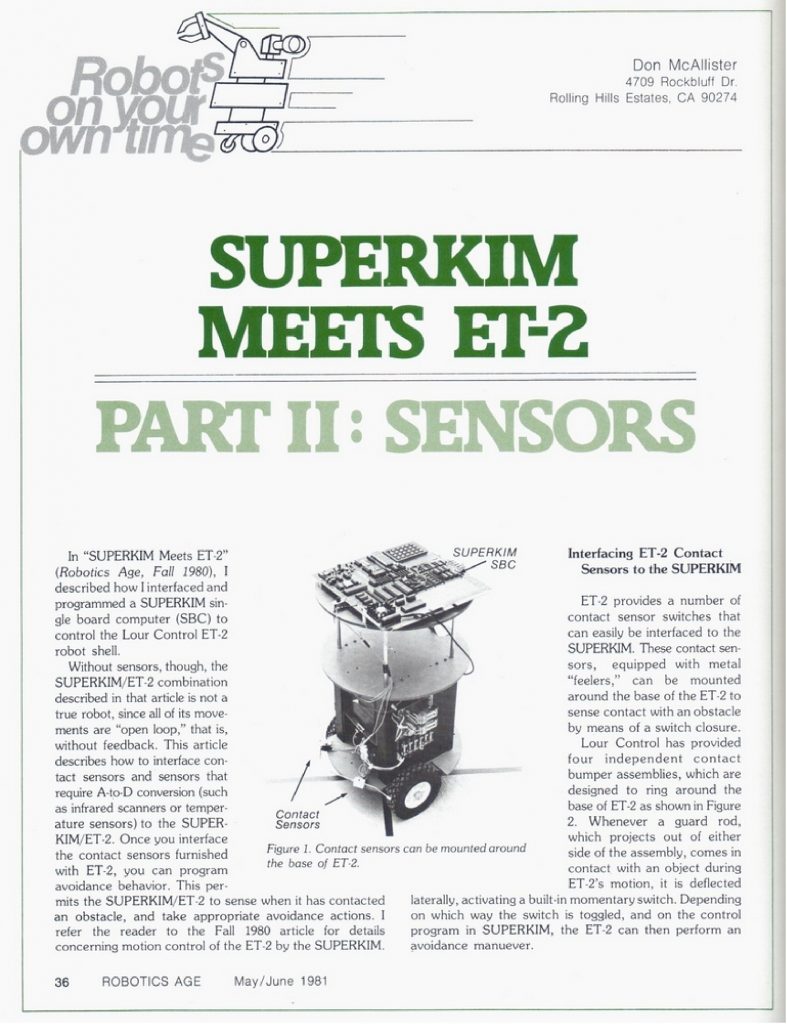 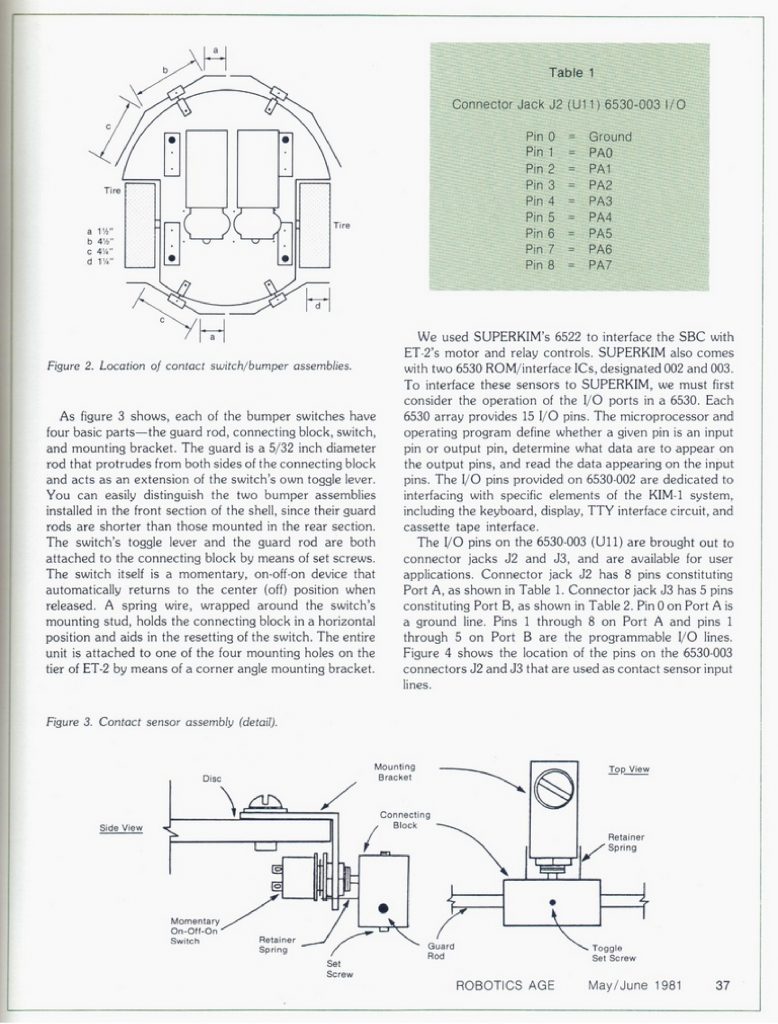 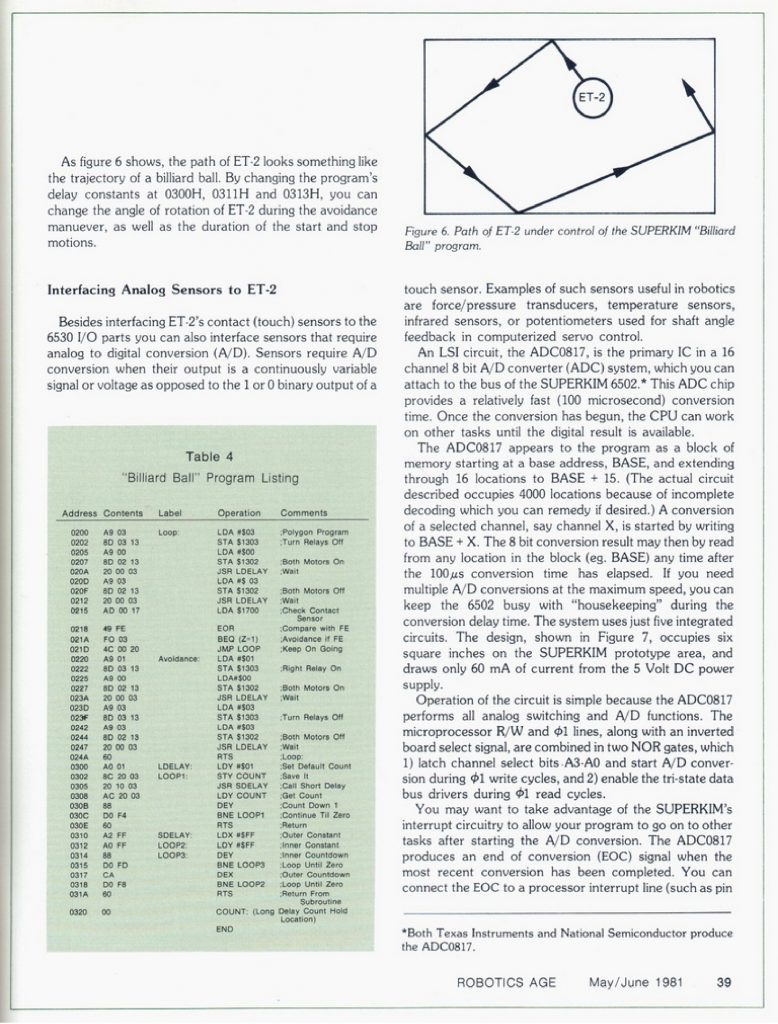 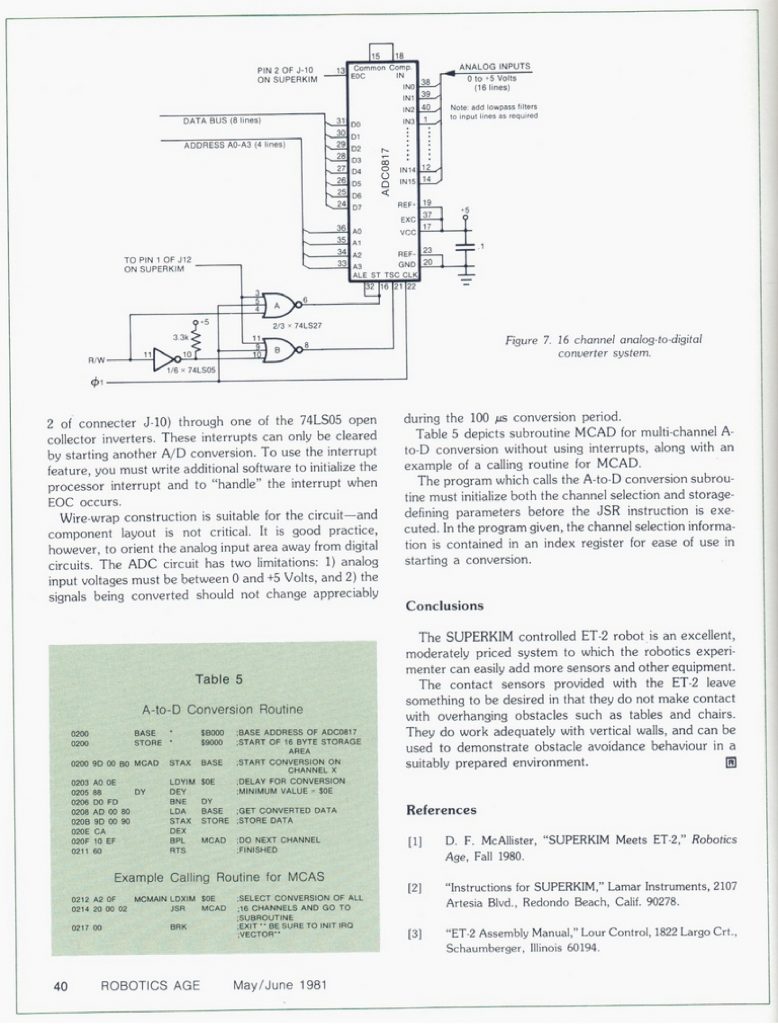