The SYM-1 SBC has a short, but chequered history. The concepts that were built into the Super Mon 1.1 have subtly influenced the very well designed BBC Micro and laid the seeds for the ARM line of computers. Its major bottle neck though was not having a reliable filing system. The board originally was designed with an audio cassette tape system in mind for saving and loading files. This was a cost saving measure and a practical reality. Cassette recorders were vastly cheaper and more plentiful than Floppy Disc Drives.

Faced with the problem of reading the ancient literature (1975-1985) on what can be done with these boards, I decided to go about it in a different way and use the convenience of modern SBC’s like and Arduino Mega 2560 to provide the storage system. To that end I used the Arduino Mega to provide an 8-bit parallel interface and enable reading and writing 8 bits at a time, regulated into and orderly fashion where the SYM-1 was the Master and doing hand shaking to regulate the data exchange between the two computers.

Here is the circuit diagram to carry out this exchange. 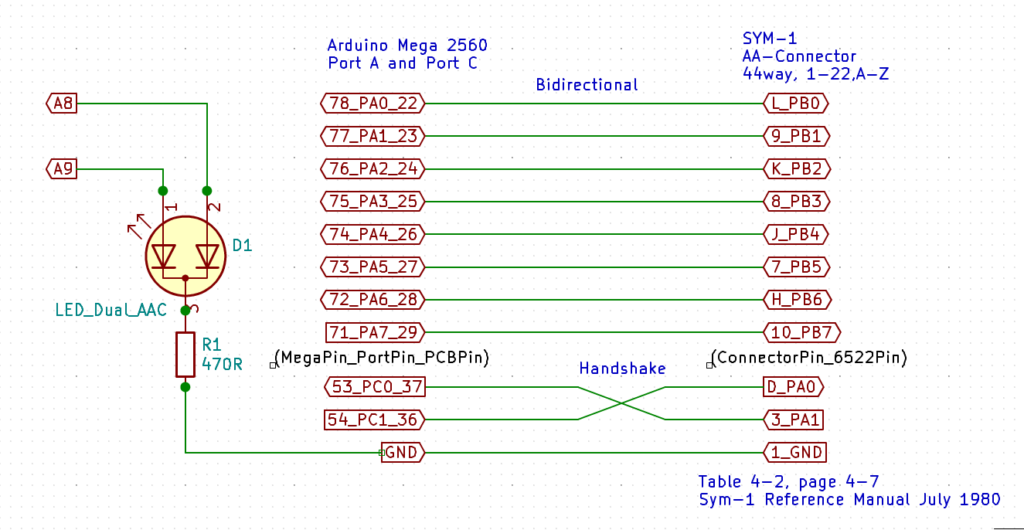 Very simple. The handshake lines were crossed over to make the hand shake algorithm as similar as possible on either side. The SYM-1 is the master and signals the Mega what data is to be exchanged. The mega has to respond with either sending the SYM-1 bytes, or is requested to listen to the SYM-1 for bytes. So the Mega simply waits to be “told” what to do. As long as the two systems stay in sync, then exchanges progress with next to no errors. Errors of data exchange are undetectable at the moment. Algorithm errors where the exchanges were not symmetrical were challenging to eliminate due to rusty skills with 6502 machine code. But that was what the challenge was all about. 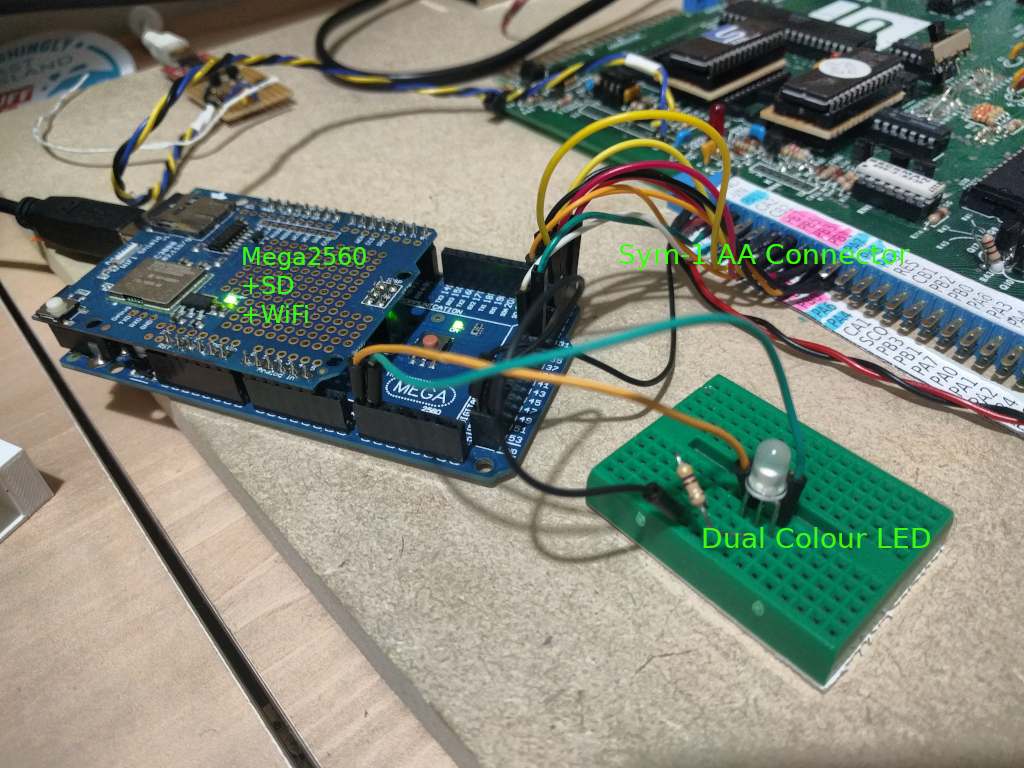 The dual colour LED shown in the photo connect to Mega pin 8 and 9, and they serve to alert the user of reads and write status, but most important of all, to also alert the user if the Mega starts up and finds the SYM-1 with any logic signals other than “handshake=null” to begin with. This is rectified when the MFS is started by the SYM-1 running the FS linking extensions at $9000, as it resets the SYM-1 handshake interface.

The speed of the exchange is quite fast, though I am waiting until I can do something like transfer an 8kB ROM image, eg BASIC to RAM from the SD Card to get an estimate of the transfer rate. It is certainly an astronomic step from the cassette filing system days!!