The SYM-1 was created by Synertek in the age of Teletypes ASR-33 when they were pretty much the best “golden standard” interface available for some, and for others the cheapest was the ubiquitous Hex keyboard and display. Well it was 1978, or thereabouts, and real live hardware of any sort was hard to come by, and these guys wanted to reach out to what we would call “startups” everywhere to try and hopefully buy this exciting new technology. These were the Arduinos of the 1970-80s. Many big players like Apple, Commodore and Acorn got involved and sold many thousands (millions?) of computers based on the 6502 processor. But it also opened a fantastic world to a whole bunch of bedroom enthusiasts who just wanted to know what was going on and what these things could do. The board that preceded the SYM-1 (originally called the VIM-1), was the KIM-1 designed by Mostek. This was a huge success, and was loved by enthusiasts (no such terms as nerds, geeks or hackers back then) the world over The Synertek design was an upgraded model and a much more capable machine, though the underlying technology was the same.

CRT’s (Cathode Ray Terminals) at that stage were only glimpsed through the closed doors of the main terminal rooms of a card punch room that the lowest rung research students got to batch process their wonderful creations.

Understandably just providing an RS-232 capability as well as 20mA current loop was considered a really advanced and versatile system. In one way the SYM-1 designers were ahead of their time as the RS-232 could be rigged up with a serial interface just using TTL 5V levels logic. (RS-232 usually involved 15V supplies of positive and negative polarity.) The thought of having a computer siting on the desktop right beside the terminal had not really sunk in, and the RS-232 voltages were used to minimise the effects of noise in long wire connections. 5V Serial is now often seen in the Arduino world for example.

It seemed logical to bit-bang a full USB interface on the SYM-1 to drag it into the 21st century and so the wide number of terminal apps in today’s modern operating systems could be used with it. Using a USB FTDI Basic from Sparkfun seemed the way to go and was connected up. This proved not to work. After a bit of multi-meter work it was determined the polarities of the data streams were inverted. So while the RS-232 assumed a “hi” signal was -15V, the 5V logic assumed it was something above 4.5V. So the SYM-1 understood 5V logic but the signal would be inverted. The FTDI board provided a 5V rail and a GND, and a couple of BC548’s and four resistors were rigged (hacked?) up as inverters. 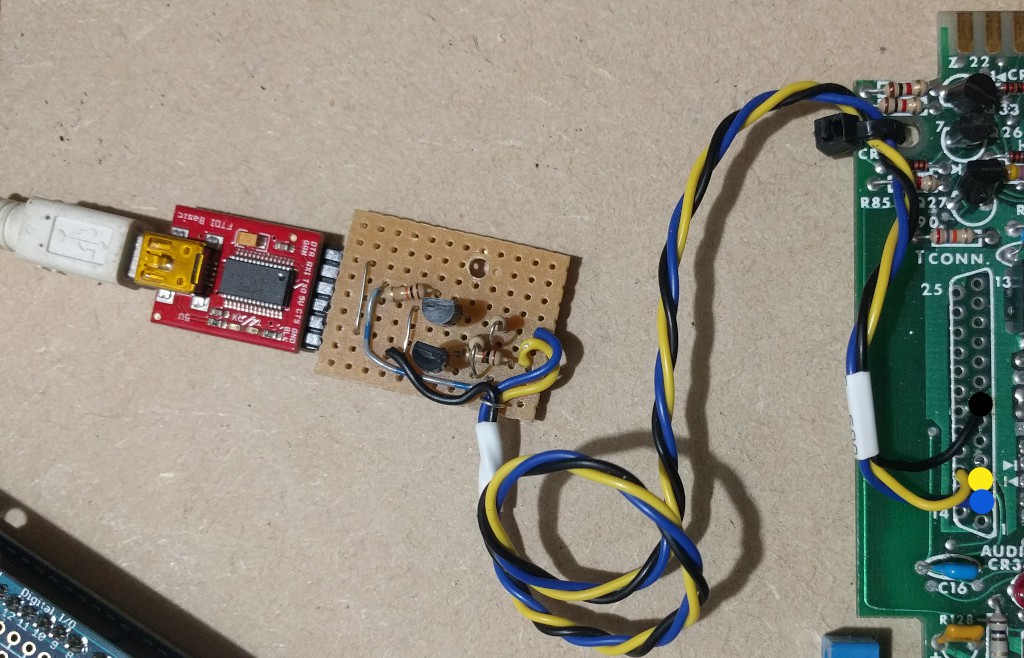 This proved to work. How is this known? Here is a printout of the SYM-1 boards response when a ‘Q’ is typed after a reset (plus there is a Beep from the piezo transducer).

The SYM-1 has a dual login option. If the Serial Port responds first it auto detects the Baud rate and continues to work with it. Alternatively the onboard keyboard has “CR” (carriage return), and this then would assume control. The “.” is one of the most modest startup messages ever. 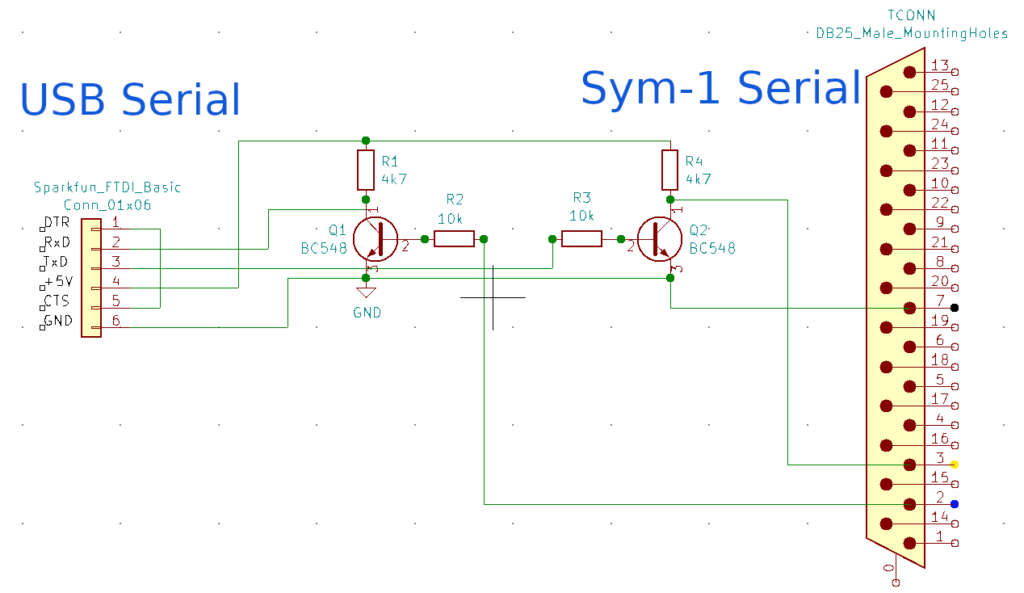 The Baud rate is determined by timing the first character typed and setting the Baud rate from that. In this case it is the character ASCII ‘Q’. It is probably one of the most understated boot up messages of all time, the SYM-1 responded with the “.” to indicate a successful negotiation of a serial connection. Extremely modest! However, as we shall see, this self effacing group of programmers were an inspired group and wanted their design to incorporate as many really useful features and not just “glam”.

So if you have a retro SBC lying around and it says it has an RS-232 interface then you will probably need to reduce the voltage swings to a 0V-5V range to get it to work with a modern USB-FDTI interface, but also invert the signal polarity as well.

If you would really like to go down a retro computer rabbit hole, then look up “RS-232” pin-out standards and how they can be interpreted. The real convention mix-ups arise from the lack of a rigid standardisation of who is the sender and who is the receiver. It is a nightmare. Gender changing was all the vogue right back in those days!!!! Plug and Play had quite a different meaning, but often similar levels of frustration.