The Corsham variant of the KIM Monitor is for the most part made up of the code in the 6530-002 ROM. The 6530-003 (audio cassette save/load) ROM was removed.
Placed in the main ROM of the KIM Clone.

There is no technical reason why you could not load the original KIM 6530-002 and 6530-003 ROMs into the KIM Monitor EPROM. The Corsham KIM Monitor is a bit more convenient.

Source of Corsham KIM Monitor
a>

Or build your own version from the pagetable blog (for which my KB9 was the KIM-1 version as input!) Install the CC65 package, then run the make.sh command, then look at the file tmp/kb9.bin, You’ll need to convert that raw binary image to a file suitable for downloading to the KIM, see the KIM-1 tools for a utility. All of these needs at least 12K of RAM starting at $2000 in the KIM-1

Here is a file suitable for downloading onto a KIM-1. It loads at $2000 but to run it you’ll need to start at $4065. Use the L command in KIM-1’s monitor, then upload the file. I strongly suggest that you change your terminal emulator so it adds a 200 ms pause at the end of each line. Once it loads, run it by going to 4065 and running it.
4065 G
To see the easter egg, answer “A” when it asks for memory size.

This is still experimental but I have a version which uses functions in the xKIM monitor (present on the KIM Clone or on the 60K RAM/EPROM board) to save/load from the SD Card System. It also has a DIR command. This is an Intel HEX file and must be loaded from the xKIM “L” command:

Tom Pittman’s Tiny BASIC
Tom distributed a very small BASIC that needed about 3K to run, and was available on paper tape for $5!!! He has quite a bit about it at:
http://www.ittybittycomputers.com/IttyBitty/TinyBasic/

Here is the source code, listing, and binary to my disassembly which includes a lot of comments and notes from Tom Pittman:
Tiny Basic source
Tiny Basic listing

All the early issues of Dr Dobb’s Journal discussed using using an intermediate language (IL) to write a general interpreter, then writing a BASIC interpreter using the IL language. Nobody used this except for Tom Pittman. I liked the idea and about five years ago wrote my own BASIC using that approach. It is buggy, but the sources are on the Corshams github so anyone can take them, hopefully debug things, and put fixes back in place. My version also has commands to save/load programs to/from a Corsham Technologies’ SD Card System.

The software above was assembled with the AS65 Kingwoods assembler, a command line utility for Windows (including 10).

A typical build for a bianry and hex output would be: 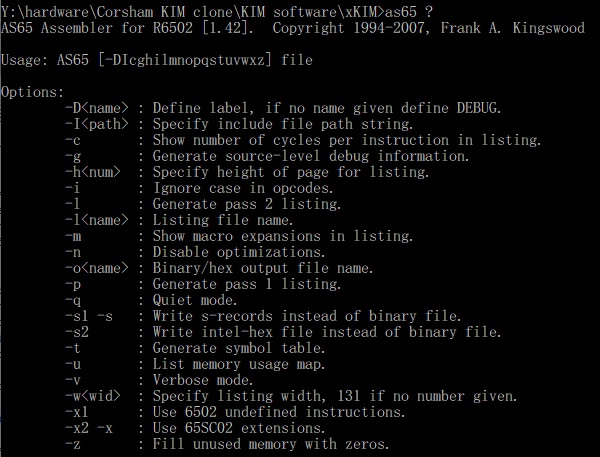 by Bob Applegate
This memory test was originally based on Jim Butterfield’s memory test program in the First Book of Kim, but has grown a bit. This now tests every memory location using a rolling 9-bit pattern. Ie the pattern repeats every 9 bytes, so this will detect most shorted address line problems. I use this to test memory boards, so it will run forever unless an error is detected. At the end of each pass, a ‘.’ is printed.

This does output to the TTY port, so if you’re only using the default KIM display, the output functions will need to be tweaked. Not hard to do, but I didn’t need it.

Written February 2006 by Bob Applegate, but it uses some bits of code from Jim Butterfield, and Ross Archer
Memory test soource and hex file 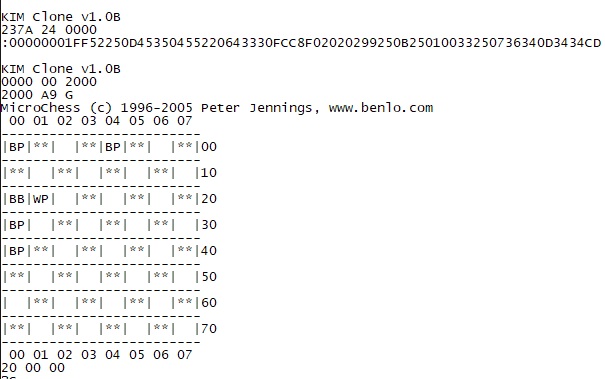 Source and hex file Microchess for the KIM clone